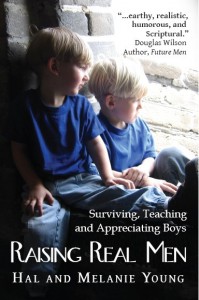 Through a great friend, I recently had the opportunity to review an audiobook I've been eying for the past year or so.  Raising Real Men, by Hal and Melanie Young (read by Hal Young) was an absolute delight.

On their webpage, there is an endorsement by J. Michael Smith, President of HSLDA, that says, "This is a book that every family should have..."  Prior to reading the book, I thought that was hyperbole. After listening to the book, I think it is only a very, very slight exaggeration.

Here is what I would say about it:
Okay, maybe the HSLDA guy had it a bit closer to right than I first thought.  It boils down to, I think this is a book every family should at least read, and those with boys should own and re-read regularly.

I'm giving this book about a hundred stars, on a scale of one to five.  Seriously.  GET THIS BOOK.

I grew up with brothers.  I grew up in neighborhoods that tended to have very few girls.  My Barbie doll dated GI Joe -- a real man.  Ken was for the flighty Barbie dolls of those silly girls at school.  And I grew up to have sons.  Four of them, in a row.  Followed by one little girl.  (No offense intended, if your Barbie dated Ken.  Really.)  So maybe I understand boys a bit more than your average mom.  Or maybe I tend to forget some pretty important things about boys, and I need Hal and Melanie to remind me.

Did I agree with absolutely everything they had to say?  Certainly not.  I agreed with an awful lot of it though.

Some highlights, or why I think this book is so fantabulous:
I've implemented a lot of things as I listened.  Some were things that Dale has been after me to change already, some were just slight adjustments in how we already were operating as a family.  Some were totally new concepts.

To end an already too wordy review, let me tell you about some:
Bottom line:  Buy this book.  Or the audio.  Or get the Mom & Dad Special (a book and an audiobook).  You could wait a week to do it, because you have a chance to win one from me.  I'll make that a separate post though. (A hint: commenting on this post will be one way to get an entry.)

Disclaimer:   I received this book for free for the purpose of writing this review.  No other compensation was received.  The fact that I received a complimentary product does not guarantee a favorable review.

I just posted about this book too, and I agree, it was a must read! I had zero brothers growing up and now have 4 boys already among the 2 girls. I've got a lot to learn!

I agree with Lauren -- great review. If it can give me ideas to lower the volume level in our house, I'm looking for the book tonight. :)

Thanks for this wonderful review. I have had this on my wish list for months. I'm always amazed at how different boys are. It's wonderful, but sometimes I feel so unequipped!

I have 2 copies of this book and love it! It is the best I've ever seen on the subject.

I think I need this book...boys are very different creatures from girls and raising boys is definitely interesting. Thanks for the "wordy" (was it wordy, I didn't notice) review.

My Barbie was rescued by G.I. Joe after being kidnapped by Darth Vader, or some other baddie, btw.

I grew up with lots of brothers (7), one sister and a Barbie doll just wouldn't have survived - so I didn't have one!

I now have 3 boys and 1 girl (and very little sympathy for that girl heehee! - been there done that!) and I still don't get the boy thing!

Definitely adding this book to my must read list, but I'll get the audio book for hubby.

Great review - thank you! I have had my eye on this book for quite some time. Entered your giveaway too!

I grew up with brothers and no sisters, and always wanted boys. I had two girls first and was always so proud of what "tomboys" they were...until I had a boy. Wow is he ever a boy. When I found out I was pregnant with a boy I began scavenging the market for boy information. I listened through Dobson's info on raising boys, and Raising a Modern Day Knight and a few others. I have seen this book too, but haven't had the opportunity to read or listen to it. After your review I'm definitely putting it on my list. Thanks for the good info!
Chris

Oh please, can I win the audio book? I was one of two girls and my dad was the only boy out of 3, my mum the younger of 2 girls. Not much boy-rearing experience there. I only have 1 male cousin but he was lucky enough to grow up on a cane farm, a great place to grow real men.

I always wanted boys and I love my 4 but they do bamboozle me sometimes. I follow Raising Real Men on Facebook but don't go there often. I have always liked their posts but would love a whole book of their ideas.

Nice to hear that you and a few others whose opinions I value think highly of this book. If I don't win it looks like I will have to find my Paypal account password.

Great review! I've heard about this book too and have it on my list of "need to read." I have one son as of right now and we homeschool and I have two daughters so this book would be very relevant. I already know at my son's young age of 21 months that he is different then my girls. I could use all the help I can get to teach and train him as the Lord would have. I would love the actual book, but my second choice would be an audio book IF the authors were the ones reading it. I've listened to another author read book and it was SOOOOO much better that way.

Oh I have been wanting this book so badly! I am a homeschooling mama of 2 boys. One has Tourette Syndrome and that presents and extra set of challenges. I need all the help and advice I can get on raising good Godly men without losing my sanity in the process!! :)

I have been wanting to read this book for months. I would love to win an audiobook of it. I loved your review of this book, Debra. You really made me want to read it even more! ;)

I have four sons and I was the only girl with 3 older brothers. I think the book may have been written with me in mind. I would love the audiobook because my hubby and I enjoy listening together.

Oh, boy!! We need this one here! I have three sons (on daughter, one step daughter....the step daughter has three older half brothers!!)....and I have two brothers, no sisters, of my own!! Yep! Definitely been surrounded by guys!! ;-)

Thanks for sharing about this book. It's on my MUST READ list. I want to do a better job raising my son and want to better prepare my daughters for the men GOD has planned for them. You've intrigued me!

I've added this book to my Goodreads list and I am sharing it on FB. Thanks for the review! I can't wait to read it.

I'm not actually entering the drawing cause I already have the book, but I wanted to say do you know what page the commando thing was on. Cause I need that, and I somehow missed it....

Amy -- oooh, the commando thing. It's in one of the last chapters. I'll see if I can figure it out though...