Book Review: How Huge the Night 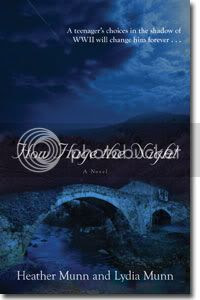 I am always on the lookout for good historical and wholesome fiction for my teen, so I was interested when I had the opportunity to review How Huge the Night by Heather Munn and Lydia Munn.

I was especially interested as we are rapidly approaching the 20th century in our history studies, so a novel about a teen in France definitely appealed to me.


Fifteen-year-old Julien Losier just wants to fit in. But after his family moves to a small village in central France in hopes of outrunning the Nazis, he is suddenly faced with bigger challenges than the taunting of local teens. Nina Krenkel left her country to obey her father's dying command: Take your brother and leave Austria. Burn your papers. Tell no one you are Jews. Alone and on the run, she arrives in Tanieux, France, dangerously ill and in despair.

Thrown together by the chaos of war, Julien begins to feel the terrible weight of the looming conflict and Nina fights to survive. As France falls to the Nazis, Julien struggles with doing what is right, even if it is not enough-and wonders whether or not he really can save Nina from almost certain death.

Based on the true story of the town of Le Chambon-the only French town honored by Israel for rescuing Jews from the Holocaust-How Huge the Night is a compelling, coming-of-age drama that will keep teens turning the pages as it teaches them about a fascinating period of history and inspires them to think more deeply about their everyday choices.

Since this is marketed as a teen novel, I picked it up fairly late one evening figuring I could read a few chapters and head to bed.  Nope, not a chance.  I stayed up until 4 a.m. finishing the book.  I had no idea it had gotten so late, as I was completely engrossed in the story.

Having read the book, I'm even more glad I was able to review it.  The story is primarily about Julien, with a secondary plot line involving Nina.  Even though I've found a couple lately, it isn't often that I find truly good teen fiction with strong boy-appeal.

Julien is a fabulous character.  He comes across as so very real.  Fairly self-centered at the start of the novel, he gradually grows and begins to change.  The publisher's blurb calls this a "compelling coming-of-age drama" and that seems to me to be a perfect summary.

Julien is torn by a lot of normal teen stuff, which is something I really appreciate about this novel.  It isn't just about the war.  There's the usual playground soccer field pecking order types of things, and Julien grappling with doing what he knows is right vs. getting back at someone who hurts him.

One thing to note, though, is that this story does take place in wartime, and there is mention of some violent events.  In particular, Nina faces an attempted rape situation.  It is not graphic, and nothing actually happens.  But I did feel I needed to put in a warning that it is there.

This book is fantastic.  It will be part of my kids' high school reading when studying world history.  I hope that the Munn's have plans to write more books.  I'll purchase them, if I'm not fortunate enough to have the chance to review them.

Disclaimer:  I received this book through the LitFuse Blog Tour.  No other compensation was received.  All opinions expressed in this review are my own.

It makes me so happy that you enjoyed so many different aspects of the book so much. Like the ordinary-teen-life stuff. That was an aspect I wouldn't have chosen at first (when I came in on the project it was pretty much set in stone that the first third of the book would cover the first seven months of the war when "nothing happened" from a French point of view) but it turned out to be something I was so glad of, because you get to know Julien as an ordinary boy before he's plunged into war stuff.

Mom and I are actually right now working on a sequel. It's from the point of view of Magali, Julien's younger sister, who becomes the assistant of a young woman who is getting children out of the terrible internment camps in Vichy France and bring them to Tanieux. (Legally. For now.) So, not quite as much boy-appeal, but Magali is a strong, funny, engaging character, and I'm enjoying writing her. It'll probably be at least a year before that one comes out though!

Sounds wonderful!! I'll be picking this one up for our family. Thanks for the review, Debra.
Vikki in VA