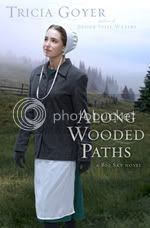 A few months ago, I reviewed a book called Beside Still Waters by Tricia Goyer.  I enjoyed that book.  Amish fiction set in the West isn't exactly common.  When Along Wooded Paths came up as a book to be reviewed, I had to have it.

The first book in this series involved Marianna moving to Montana from Indiana, leaving behind the man she plans to marry and leaving behind her community and everything she's ever known.

I was incredibly impressed by how complex the characters were, and I was definitely anxious to read what's next.


All she wanted was a simple Amish life . . . But now Marianna Sommer finds herself depending on Englisch neighbors. Although proud of living apart from the world, she and her newly relocated Amish family have discovered that life in the remote mountains of Montana requires working together.

As Marianna begins helping those different from herself—and receiving their help—her heart contemplates two directions. She’s torn between the Amish man from Indiana whom she has long planned on marrying and the friendly Englischer who models a closer walk with God than she’s ever seen before.

Who should have young Marianna’s heart? What is God asking her to sacrifice? Her traditions? Her community? The answer is found along the wooded paths.

What did I think of Along Wooded Paths?  It lived up to the promise of the first book.  Goyer continues to explore the characters, to let them grow, and to throw in a twist or two besides.  I think this book could stand on its own, but it would be better if you have read the first book.

This book continues to explore some amazing questions, and the relationships with the Englischers in her Montana community continue to be intricate and fascinating.

Goyer paints a picture with her words, and maybe it is because I've been in the mountains of Montana, or because I live near mountains in Colorado now... but I feel like I am there.  I can feel the wind, or the snow... and I most definitely can see the trees.

This series is fantastic.  I will be keeping an eye out for the next one, as I definitely want to know more about what happens with Marianna.

Tricia is celebrating the release of Along Wooded Paths with a Fabulous Facebook party on October 18th. She'll be giving away prizes and a sneak peak at the next book in the Big Sky series.

Then during the second half of the party she'll be hosting a LIVE AUTHOR CHAT on her website and announcing something BIG! CLICK the button (on the left) to RSVP for the party - then go here to sign up for the Live Author Chat.


Disclaimer:  I received this book through LitFuse.  No other compensation was received.  All opinions expressed in this review are my own.
Posted by Debra at 10/04/2011 02:51:00 PM