I've vaguely heard of Zometool before. I think I had even looked at their website briefly at one point, years ago. When the opportunity to review a product of theirs came along, I knew enough to know I was interested.

Then I started looking at the choices in detail.

It did.  We received a Bubble Bundle, which consists of a basic starter kit, the Creator 1 plus a Bubble-ology lesson plan book, which is suggested for grades 5-9. We also received a discount code which you can use to purchase your own sets. That's down at the bottom of this review! 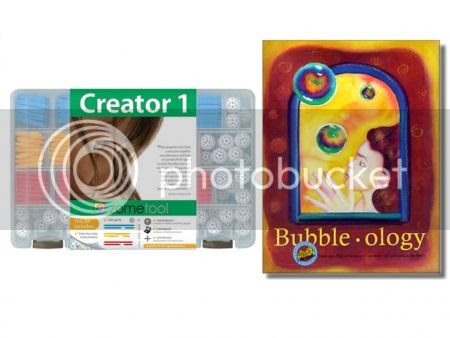 My kids got a look at the set and "interesting" was as excited as they got.  I was quite disappointed.  The 12 year old started playing with it.  His results looked something like this:

He had fun building it, but I didn't get the feeling he was learning much of anything from it.  Expensive tinker-toys, was my reaction, but I remained hopeful.

While we are on this photo, let's talk a bit about what Zometools are.  Those little white balls (nodes) have a whole lot of little holes where you can put the colored sticks (struts).  Sounds pretty simple, right?

Well, each of the colors is different.  Blue struts have rectangular shaped ends, and they fit into the rectangular holes on the node.  Blue in the Zome world, represents 2s -- rectangles (4), octagons (8)...

Yellow struts have triangular ends which fit into the triangular holes on the node.  Yellow shapes usually involve 3s or 6s.

Red struts have pentagonal ends which fit into the 5-sided holes on the nodes. You've caught on by now... reds involve pentagons and decagons (a term we actually hear in this house frequently now).

Eventually, my 15 year old science geek caught on to the fact that these were more complicated than they appeared.  This was the result of his playing around (did I mention this is Art as well as math and science?): 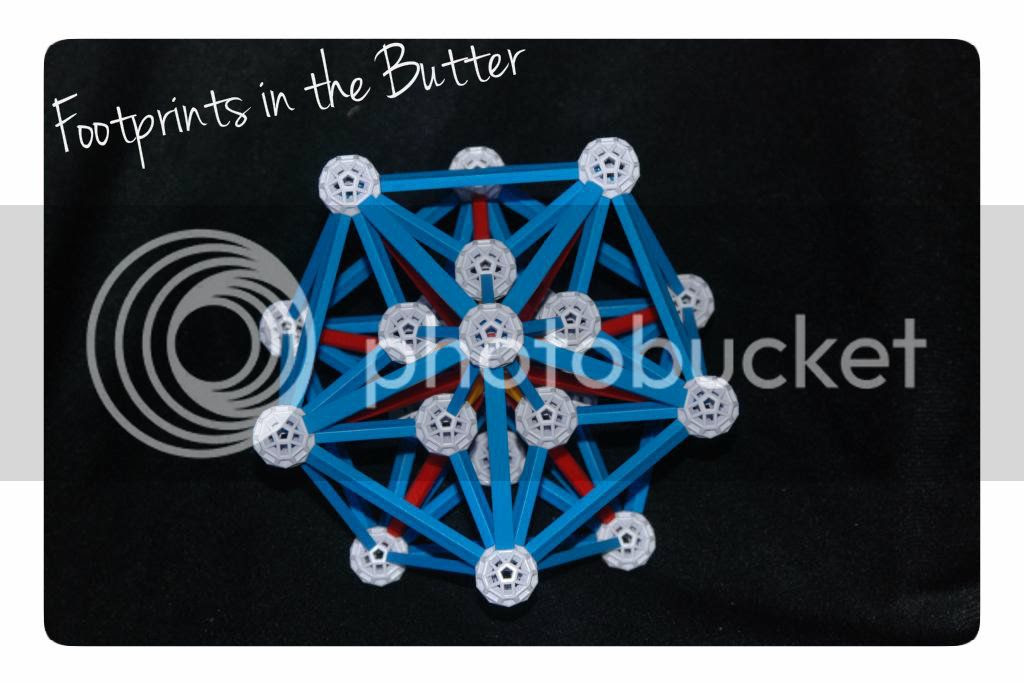 Once Connor pulled out the Manual 2.3 that comes with the kit, he started getting really excited.  All of a sudden, he was talking about perspective cubes, 4th dimension cube shadows, and rhombic dodecahedrons.

He lost me.  He has been able to explain what he is building in terms that the 12 and 14 year old grasp.  So far, I've refrained from telling him that his creations are pretty (they are!)

Since we're talking about the manual, let me point something out to you.  Go visit the Creator 1 webpage again.  Scroll down.  You can download this manual for free.  You can download most of the instructional materials for free.  How amazing is that?  So if you already have all the parts for one of their kits, you don't have to purchase the kit just to get the instructions/information.  You can just go and learn some incredibly neat concept using the parts you have.  That impresses me.

Here he is with one of the things he put together after reading about it in the manual.  A 4-D Perspective Cube Shadow. 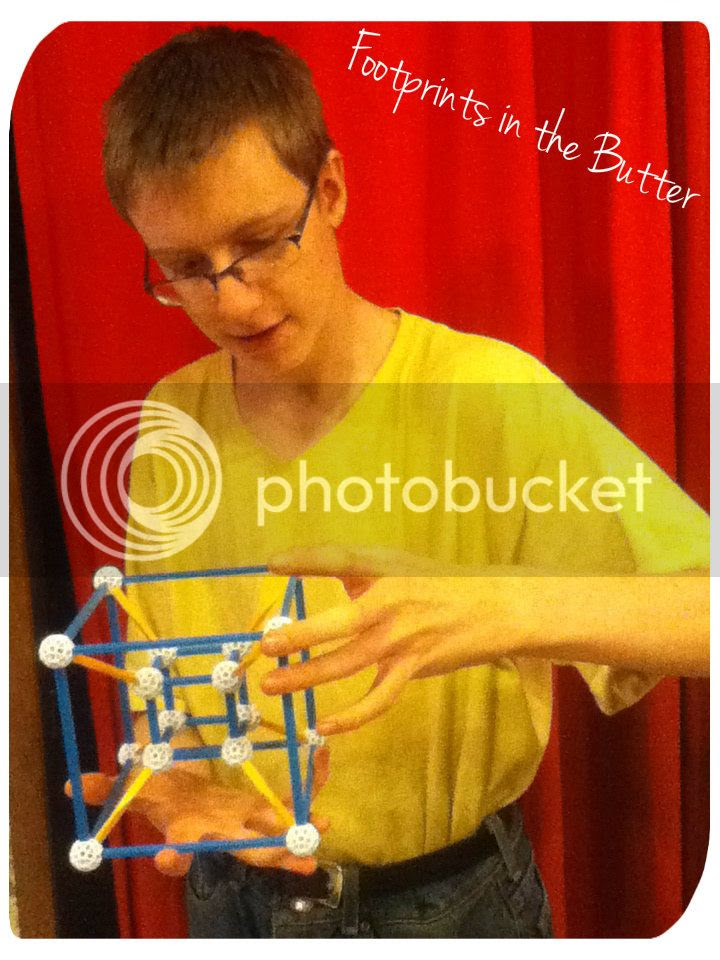 And here is a really rough video we did at the spur of the moment, of him attempting to explain 4th dimension shadows to me.  Other than an inability to remember the name of the shape and a bit of stammering while he was trying to get the thing oriented correctly, I thought he did well.  Especially since it was midnight when we filmed this.  We're night owls.  I confess.

Richard, the 8 year old, has been limited to only using blue struts.  More on that below.  But by downloading the instructions for the Ice Crystals and Stars project kit he has been able to do more than just make cubes. 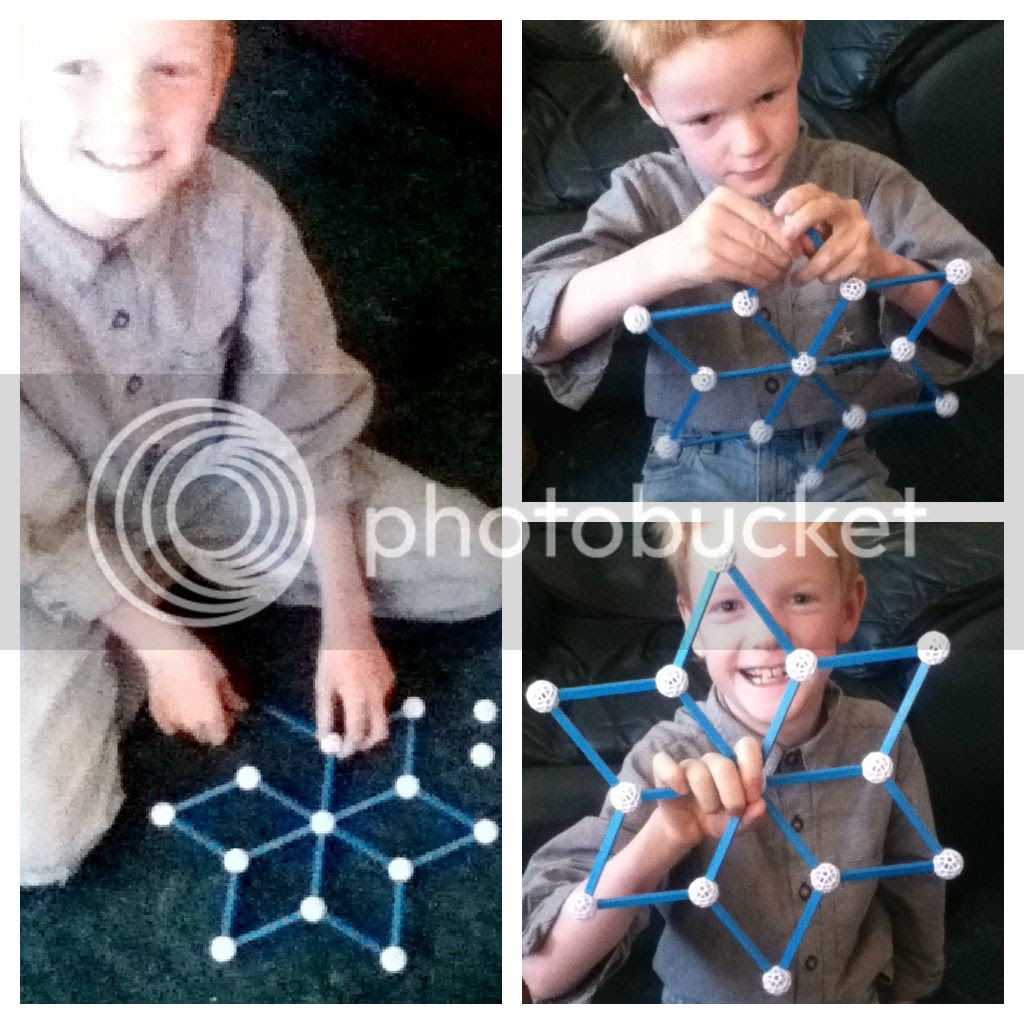 Not only can we build more intricate designs, but we read through the material and learned about crystals, snow, hexagons, 2-D, 3-D, and more.

Then there is the Bubble-ology book.  I'll confess that we just have not done much with this yet.  I wanted to be sure to have my 6th and 8th graders use it, as it is for their age range.  But they have not both been healthy on the same day, well, pretty much since this set arrived.  Or on the couple days they were, it was too windy.  And I do a lot of things in the name of science, but messes we can make outside do not get made inside.

I have looked through this Great Explorations in Math and Science (GEMS) manual pretty thoroughly, as has Connor, and we are both quite impressed.  This does not explicitly use Zome Tool products, however many of the activities could be done using what we learned about Zometools and bubbles in the Manual 2.3.

One of Connor's first comments when he started reading through the book, was that "this has you doing actual experiments, not just repeating some pre-planned activity."  He's right.  That was one of the first things I noticed about the book as well.  The second activity, for instance, has you testing three different brands of dishsoap to see which one results in the largest bubbles.  I was totally impressed with the teacher's helps provided in the book, such as:


"You may also notice students who won't record the diameter of smaller bubbles.  Respond by saying that they are the scientists.  It's up to them to decide what is fair.  Whatever they decide to do, they'll need to make sure all three brands are treated in the same way.  Otherwise one brand of soap will be given an unfair advantage."

There are suggestions to make the activity a little easier (if your 5th graders aren't readily able to calculate averages, in this example) and suggestions to kick it up a notch (like expressing the results as the average volume of the bubble dome instead of the diameter).

There are even literature suggestions.  If you read my blog, you know that makes my heart go pitter-patter.  I love when I can incorporate a good story!

All in all, I am incredibly impressed.

So a couple warnings, from our experience.
We are also seriously "needing" to get the Molecular Mania kit.  In fact, using the code Schoolhouse15, I can get that set (or anything else) for 15% off and free shipping, and so can you.  Hurry though, as that is only good for a couple of days (November 30).


This stuff is fabulous, that is my bottom line.   And I know I can't communicate that adequately.  You have to use this to get it, I think.  And with kits available for as little as $10 ($8.50 with the above code!), you really should try it.

I am certain my kids are getting more for Christmas.  These are amazing.


Disclaimer:  I received this product in exchange for my honest review.  No other compensation was received.  All opinions expressed in this review are my own.
Posted by Debra at 11/29/2012 11:24:00 AM

These look amazing!! Thanks for sharing!