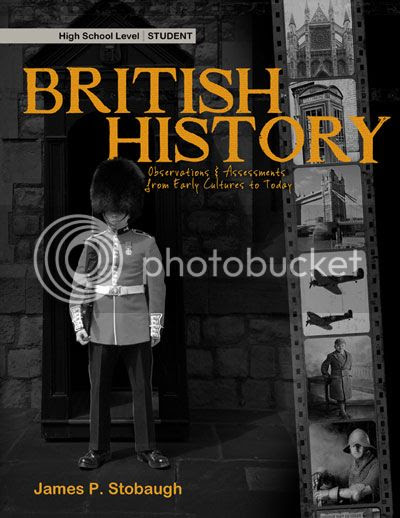 A while back, I posted a review of World History and a review of American History by James Stobaugh.  Those books were the first and second years in a three-year high school history curriculum.

British History is the final year of that set.  It comes as a student book ($24.99, 272 page paperback) and a teacher book ($14.99, 144 page paperback).  The book is nonconsumable so you can use it with each of your children, a feature I really love.

Doesn't that cover make you want to jump right in?  Or maybe that question just proves I'm a total geek.  Hmmm.


Respected Christian educator, Dr. James Stobaugh, offers an entire year of high school British history curriculum in an easy to teach and comprehensive volume. British History: Observations & Assessments from Early Cultures to Today employs clear objectives and challenging assignments for the eleventh grade student without revisionist or anti-Christian perspectives. From before the Anglo-Saxon invasions to the end of an empire, British history trends, philosophies, and events are thoroughly explored. The following components are covered for the student:
Students will complete this course knowing the rise of the British empire that influenced nearly every corner of the earth!

The book, like others in the series, consists of 34 chapters, with daily lessons for days one to four, and a test/assessment for the fifth day.  The lessons start off in pre-Roman England, and quickly (chapter 4) moves up to the Norman Invasion (1066).  From there, it goes through various monarchies and eras, hitting World War I in chapters 29-31. The final three chapters cover British History since  the end of World War I.

Unlike my previous reviews, I don't really have a hang-up about the scope and sequence.  Maybe that is partially because I'm not as familiar with British History, I don't know.  But as I worked through the first third (or so) of the book, and as I skimmed ahead through the remainder, I don't feel like there are huge gaps.  I would prefer to see a bit more coverage of World War II, but really, this seems at least good.  There is a chapter (that is one week) on totalitarianism leading up to WWII, and another chapter that covers the Great Slump, Queen Elizabeth II, appeasement, and finally World War II itself.  The final chapter covers post-WWII, the Cold War, the end of the empire, and the 1970s and beyond.  So, basically, the past 75ish years are covered in three weeks.

I will choose to beef up the World War II time period a bit.  I'll have Connor read a biography of Churchill, for instance.  As long as you don't expect much in recent history, I think the choices made for this title are quite good.

Like I have mentioned in the previous two reviews, if you were to spend 30 minutes a day for 34 weeks, you are only talking 85 hours of work, which is simply not enough "quality time" in my opinion for a full high school credit.  This means we will be adding in additional work, which I am finding nice, actually.  One thing I plan for all the kids is to find a bit more on the history of Wales (the only "British Empire" in our heritage.)  For Connor, we can focus a bit more on the Industrial Revolution, for instance.  With Thomas (now 12), we'll probably spend a bit more time in the early chapters talking about archaeological digs in England.

I'm really liking that I have a program that gives a solid overview without taking up hours of time each day.  It is so incredibly easy to add a couple of things here and there.

Another thing to note is that everything is in black and white.  I appreciate that this helps keep the costs down, and when there is something we think we need in color, it is a quick search to find an appropriate image online.


You can watch this promo clip about the history series:

Disclaimer:   I received this book for free from New Leaf Publishing Group.  No other compensation was received.  The fact that I received a complimentary product does not guarantee a favorable review.
Posted by Debra at 11/19/2012 07:17:00 AM

This looks really interesting - is it necessary to do the other two books, or can this one stand on its own?

Oh, and if you're a geek because you love the front cover picture, I am a geek too. =8-)

Kym -- this definitely can stand on its own. I think the three books work really well together... between them, they cover WWII decently, for instance.

If I was to use only one, it would be this one.