Review and Giveaway: Ring the Bell

Disclosure of Material Connection: I received one or more of the products or services mentioned in this post for free in hope that I would mention it on my blog. Regardless, I only recommend products or services I use personally and believe will be good for my readers. I am disclosing this in accordance with the Federal Trade Commission's 16 CFR, Part 255: "Guides Concerning the Use of Endorsements and Testimonials in Advertising. 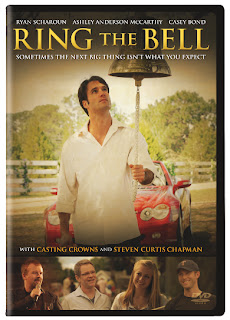 We had another family movie night, this time watching Ring the Bell.  The idea of this movie really appealed to me... Steven Curtis Chapman, Casting Crowns... what more does a movie need?

First, a bit about the film ~


Ring The Bell shares the story of a slick, big city sports agent Rob Decker who seems to have it all. But on his latest mission to sign a high school baseball superstar, Rob becomes stranded in a small town where the simplicity of life—and the faith of the people—stand in stark contrast to his own fast-paced, win-at-all-costs mindset. Torn between these two worlds, will Rob have the courage to let faith transform his life? This heartwarming story of redemption is sure to entertain and inspire the whole family.

Ring The Bell features a host of well-known Christian music artists, such as Mark Hall along with his band Casting Crowns, Steven Curtis Chapman, and Matthew West, all who play a role in this inspirational drama. Several former and current Major League Baseball all-stars are also featured in the film: ESPN analysts John Kruk and Rick Sutcliffe (a former Cy Young Award winner), along with Ben Zobrist.

This family-friendly movie was produced by Mark Miller, Beach Street Records' founder and Casting Crowns’ producer. Miller, who is also the lead singer and founder of country music group Sawyer Brown, co-wrote the script with Thomas Weber and Weber directed the production.

We enjoyed it, and I am glad to own this movie.  It is one we'll watch again.

Rob Decker's character started off feeling a bit forced... like he was trying too hard to be all about money, fame, and stuff but he (the actor) didn't quite believe that this was the real him.  Once he gets to the small town, his actions (still about money, fame and stuff) start seeming a lot more real.  After the Casting Crowns concert about midway through the film, he is truly a believable character.

The Casting Crowns concert is phenomenal, including a mini-sermon -- and alter call -- by Mark Hall.  According to the special features, that part of the movie wasn't scripted.  Mark did a phenomenal job with it.  It made me want to dig out my Casting Crowns CDs.

Another highlight is Steven Curtis Chapman, who plays the pastor in this town.  He has a great scene where he is telling Rob about Jim Elliot.  Loved that scene.

My favorite part, though, were the scenes at the ranch.  Some of the characters are involved with caring for orphaned and foster boys.  What an incredibly wonderful thing to be doing, and I enjoyed that aspect.

One of the special features is a discussion guide.  I have not actually used it yet, but I am going to pull it out for use with my personal youth group.  <grin>

Good stuff.   We really enjoyed it.  You can too, as I have one to give away!

Nope. I never have been into sports but my husband and son love baseball :)

I'm a fan of Little League baseball, but I don't really watch baseball on TV.

Not a baseball fan personally. I have fond memories of sitting with my great-grandpa while he watched games though.

Yes it is about the only professional sport that I enjoy. We just went to see the movie 42. It was excellent.

I like baseball, but don't watch it on television.

Thanks for this chance to win!

Not a fan, but love the actors in the movie! ;)