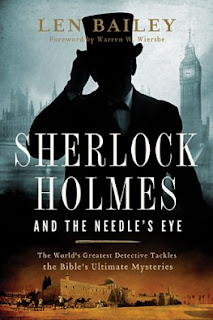 Over the summer, I've had the opportunity to read a really fun book.  Sherlock Holmes and the Needle's Eye by Len Bailey takes Holmes & Dr. Watson into ancient Israel to investigate ten Bible mysteries.

The publisher's description is as follows:


Embark on a journey through the Old and New Testament with Sherlock Holmes and Dr. John Watson as they explore exotic and spice-laden places in search of clues.

The detective and the doctor travel back in time with the help of a Moriarty-designed time machine to investigate ten Bible destinations, unlocking clues to ten Bible mysteries. The most fascinating crime cases are those that are already solved, those that have been investigated by the police and brought to a swift, satisfying, and almost inevitable conclusion. So it is with Bible stories which the reader may consider familiar and unremarkable. But under close scrutiny these stories give up their hidden clues, their long kept secrets. Like a jewel newly polished, they sparkle and shine with a fresh, introspective light.

While traveling back in time to witness certain scenes, Holmes and Watson unravel ten different Biblical mysteries, including the following:

This book can be read just like a novel, or you can turn to the back to do a Bible study, and top that off by reading the corresponding chapter.  I chose to read it as a novel, and then followed that up by doing a couple of the chapters as Bible studies.

The novel is good -- the interaction between Holmes and Watson seems very true to their established characters, and it just "feels like" a Sherlock Holmes mystery.  Some of the storyline seems a bit strange though.  They travel back in time to witness some event, but the time travel portion of the chapter really wasn't necessary, for instance.

I enjoyed the novel.  Connor, who has read everything Sherlock Holmes, also stated that "this does really seem like a real Sherlock Holmes story, though initially I didn't think that at all.  About halfway through the first chapter, it started reading 'right' though."

The Bible study portion really dovetailed well with the story, and I found that interesting.


Disclosure of Material Connection: I received this book free from the publisher through the BookSneeze®.com book review bloggers program. I was not required to write a positive review. The opinions I have expressed are my own. I am disclosing this in accordance with the Federal Trade Commission’s 16 CFR, Part 255: “Guides Concerning the Use of Endorsements and Testimonials in Advertising.”
Posted by Debra at 9/05/2013 08:55:00 PM