A. D. The Bible Continues: The Revolution That Changed the World {a Tyndale House Blog Network review} 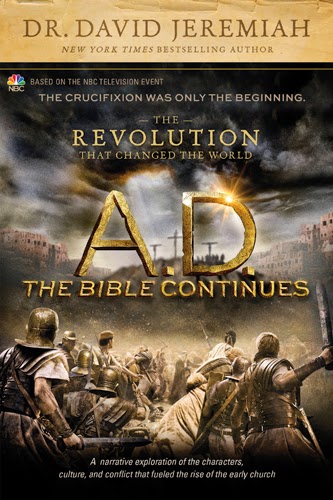 I'm not normally a fan of books written based on television shows, or based on movies.  Partially, I suppose, because I don't watch that much television.

But I've seen an episode of A.D. The Bible Continues, and I was impressed with it.  Seeing that this book is written as another look at the early church, well, I was interested.

A.D. The Bible Continues: The Revolution That Changed the World by Dr. David Jeremiah is worth a read.


When Pontius Pilate ordered the crucifixion of Jesus Christ, he thought he was putting an end to the Jewish uprising that had been threatening the authority of the Roman Empire. What Pilate didn’t realize, however, was that real revolution was just getting started.

Based on the epic NBC television series, A.D. The Bible Continues: The Revolution that Changed the World is a sweeping Biblical narrative that brings the political intrigue, religious persecution, and emotional turmoil of the Book of Acts to life in stunning, vibrant detail. Beginning with the crucifixion, NYT best-selling author and Bible teacher Dr. David Jeremiah chronicles the tumultuous struggles of Christ’s disciples following the Resurrection. From the brutal stoning of Stephen and Saul’s radical conversion, through the unyielding persecution of Peter and the relentless wrath of Pilate, Jeremiah paints a magnificent portrait of the political and religious upheaval that led to the formation of the early Church.

Complete with helpful background information about the characters, culture, and traditions included in the television series, A.D. The Bible Continues: The Revolution That Changed the World is not only a riveting, action-packed read, it is also an illuminating exploration of one of the most significant chapters in world history.

Get ready to watch history unfold. The revolution that changed the world has begun!

I expected a book that related to the television series, which did worry me a bit to be honest.  What we have, though, is a book that helps to explain the events of the episodes of the show, but you certainly don't need to be watching the series to get a lot out of the book.

The writing style is fairly easy-to-read, but not quite conversational in nature.  A bit more academic, you could say.

He starts with an overall introduction (Before There Was an A.D. ) that whips through basic story of the old testament in a few pages.  Then the first two chapters come from the Gospels, with the first one being on the trial and death of Christ, and the second chapter on His resurrection.  The rest of the book covers the first eleven chapters of Acts.

My favorite part of the book is all the little grey boxes that explain specific people, events, places, traditions, etc.

Dr. Jeremiah does a great job of making some of the scholarship around the books of Acts easily accessible to regular people.  I like this title, and I will be looking for A.D. The Bible Continues: The Book of Acts.


Disclaimer:   I received this book for free from Tyndale House Publishers.  No other compensation was received.  The fact that I received a complimentary product does not guarantee a favorable review.