Math Score is an online math program, developed by MIT graduates, that advertises that it raises test scores.  Okay, now test scores don't happen to be among my main homeschooling goals... but Math Score is more than that.  Math Score includes topics ranging from 2nd grade through Algebra I, from things like knowing your addition facts, all the way up to applied linear equations.


One thing that is a goal of mine is to have students who are fluent in math -- both in calculation and in understanding mathematical theory.  Math Score is one way for my kids to get some practice in both of those aspects.  There is a lot of content, and I believe this could be used as a stand-alone curriculum, though I am using it as a supplement.

Math Score is a no-frills, internet-based  program.  Absolutely nothing needs to be installed, it works on both our macs and our PCs, and it is basically a lot of short math worksheets.  You earn points for completing levels, and you have straightforward ways of seeing your progress.  There is nothing fancy or flashy about this.  At all.  No little animations, no earning coins to spend somewhere.  The fanciest thing about it is that there are some trophies you can earn, and you earn promotions based entirely on the number of points you have earned.

That sounds pretty boring.  But it isn't necessarily.  The worksheets are short, which helps, and they adjust for how the student is doing.  When I played with it, it quickly gave me the option to skip a few levels in "fast addition" and many other topics.  So with only a couple of worksheets, I could earn all the points possible in addition, and move on to something else.  While my 3rd grader works through them in a more methodical way, I wasn't stuck "learning" that 2+3=5... it realized I was doing great with addition and let me bypass those middle steps.

That appeals to my older children.  My youngest son wanted more 'flash' and pizzazz. One by one, here is how my boys did with Math Score:

Richard, age 5, is doing first to second grade math.  He ended up very, very frustrated with the fact that this is timed, and he really needed something more to hold his attention. Given that I do have other things he can be doing right now instead (we've been blessed with a plethora of math programs!) I opted to drop this for him.  If I wanted to make this work, I could have either greatly increased his time allotment, or I could have typed the answers in for him.  But basically, he really wanted the external rewards -- earning game time, earning some cutesy little video, whatever.  While he is capable of the math, this program does not hold his attention, and it takes too much from me to make it work for him at this time.  Another year or two, I think it will be much better for him.

Thomas, age 9, is in third grade.  I did give him a bit extra time (the parent can adjust the "padding" allowing more time per problem), and the program is working out okay for him.  He also would like a bit more flash.  But whether he wants to do this program or not, it does work for him.  He is able to work independently on it, and I can see improvement.  Given a choice, he'd choose something else though.  Here's one of his recent sessions: 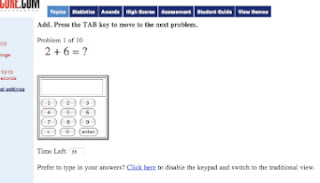 William, age 11, is in fifth grade.  He doesn't beg to do Math Score, but he does work on it willingly when it is assigned to him.  He likes seeing his scores go up, and he likes making the next rank.  He's mostly been working on math facts so far, but I think I need to encourage him to try some of the other math concepts at his grade level.  Working on the exercises involving rounding (shown below), changing decimals to fractions, types of triangles, etc. will be something he finds more motivating.  If I can get him to do 1-2 worksheets a day of the math facts, then work on more "fun" topics, I think this will work out better.  I'll keep you posted on that.

Connor is currently doing Algebra 2 and Geometry in his "real" math school life.  He is loving Math Score.  The no frills aspect doesn't bother him in the least, as he doesn't really bother with designing his own avatar and all that kind of thing on the other sites anyway.  He is able to go in and just do math.  On the most recent report I got, he had worked on the following topics:  Copy Cat; Fast Addition (he is bored with both of these, so he's been doing a worksheet per day, he's at 90 now); Least Common Multiple; Greatest Common Factor; Prime Factoring (shown below); Exponent Basics; Probability; and Quadrilateral Types.

Overall, I think this is one of those programs that is well worth a try, for probably third grade and up.  They do have a free trial offer, so you can get a feel for how the program works.  Their pricing structure is a bit complicated, but right now, the first child is $9.95 per month (price going back to the regular $14.95 after two months), a second child is $5, and additional children are $3.95.  You can prepay, and payments of $50 or more give you a bonus.  Like I said, it is a bit complicated to explain.

Just try it out.  See what you think, and give it a few days.  This is one program that (except for Richard) we all liked a lot more after a week than we did after a day, and after a month, we like it even more.

And you can check out what my fellow crewmates have to say about MathScore at:

Disclaimer:  As part of the TOS Homeschool Review Crew, I did receive a free subscription to MathScore.  The fact that I received a complimentary product does not guarantee a favorable review.  It does guarantee a review. A fair review. But I am not going to praise something unless I think it deserves the praise.  If I don't like it, you'll hear that.  And hopefully with enough detail as to why so you can decide for yourself if what I hate about it makes it perfect for your family.  For more about my take on reviews, visit my blog post here.