A couple weeks ago, I posted about a PBS special about Mugabe and the White African.  I was thrilled to discover it was available on Netflix Streaming, since we don't really get any television signal at home, so I was unable to watch it when it aired in late July.  It is also available online at PBS. 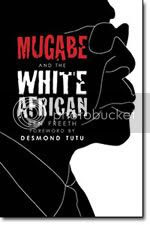 Now it is time to tell you a bit about the book.  Mugabe and the White African by Ben Freeth.  This is not an easy book to read.  If you are at all like me, you will read it with tears thinking, "why was I totally unaware of all of this when I could have been praying?"


Ben Freeth has an extraordinary story to tell. Like that of many white farmers, his family's land was "reclaimed" for redistribution by Mugabe's government.

But Ben's family fought back. Appealing to international law, they instigated a suit against Mugabe's government in the SADC, the Southern African equivalent of NATO. The case was deferred time and again while Mugabe's men pulled strings. But after Freeth and his parents-in-law were abducted and beaten within inches of death in 2008, the SADC deemed any further delay to be an obstruction of justice. The case was heard, and was successful on all counts.

But the story doesn't end there. In 2009 the family farm was burned to the ground. The fight for justice in Zimbabwe is far from over--this book is for anyone who wants to see into the heart of one of today's hardest places and how human dignity flourishes even in the most adverse circumstances.

I plan to sit my older kids down with the PBS Special when we are studying late 20th century history... and we'll see about the book on a case by case basis.  It does portray a lot of violence that is certainly graphic enough to get the point across.

You can read what other bloggers thought by visiting the book tour itself.

If you tweet we'll capture your entry when you use @litfuse. If you share it on Facebook or your blog, just email us and let us know (info@litfusegroup.com). Easy.

Not sure what to tweet/post? Here's an idea.

TWEET THIS:  Mugabe and the White African – one family’s stand for justice in the face of evil! @litfuse http://ow.ly/61JDW RT 4 a chance at $50

FACEBOOK THIS: Ben Freeth has an extraordinary story to tell about one family’s stand for justice in the face of evil. The fight for justice in Zimbabwe is far from over—Mugabe and the White African is for anyone who wants to see into the heart of one of today's hardest places and how human dignity flourishes even in the most adverse circumstances. http://litfusegroup.com/blogtours/text/13422041


Disclaimer:  I received this book through LitFuse.  No other compensation was received.  All opinions expressed in this review are my own.
Posted by Debra at 8/16/2011 11:06:00 PM