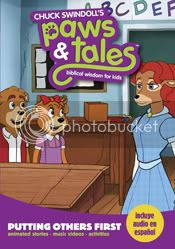 My kids have listened to Paws & Tales on the radio off and on for years.  We've always enjoyed that as the stories are engaging and definitely teach a biblical lesson.

A few months ago, we received the first video in a new DVD series, God Cares for You.  The younger kids (Richard and Trina) really enjoyed that.  So when I saw that the fourth DVD in the series, Putting Others First, was available to review, I knew I wanted to do that.

Here is what the publisher has to say:


Using colorful animation, fun characters, and great lessons, Paws & Tales is an exciting tool for helping build godly character into kids. Based on the Paws & Tales national broadcast radio program presented by Chuck Swindoll’s Insight for Living, the Paws & Tales videos communicate biblical truth and show kids how they can apply it to real life. Kids will be captivated by the adventure, caught up in the laughter, and carried away in the fun . . . and the whole time they’ll be on their way to understanding solid Bible theology. This fourth DVD in the series is based on Matthew 22:39 and Philippians 2:3 and includes two episodes that teach kids about putting others first.

In episode #1, “A Race against Time,” CJ and Staci risk disappointing Paw Paw Chuck to help someone in need.

In episode #2, “The Hire Principle,” Tiffany learns to put the feelings of others ahead of her own.

What did we think?  My older kids (ages 10-14) watched it once, thought it was cute, and really don't care if they see it again.

The younger two, however, have watched it multiple times.  They really like the first episode, "A Race Against Time."  The theme of that one -- helping others even when it isn't terribly convenient -- is something they were able to identify with.  The second one -- where Tiffany is blackmailing her classmates, is enjoyable for them, but I don't think the whole blackmail concept resonates with them in quite the same way.

The animation quality isn't superb, but it isn't bad either.  My kids (who can be pretty critical of those types of things) haven't complained.

Overall, I think this is a solid DVD for kids in the 5-8 year old bracket. We will look to complete the series.


Disclaimer:   I received this DVD for free from Tyndale House Publishers.  No other compensation was received.  The fact that I received a complimentary product does not guarantee a favorable review.