My kids love watching videos for their school time, so we were thrilled when Timberdoodle asked if we wanted to review one of the DVDs in the Body of Evidence series. 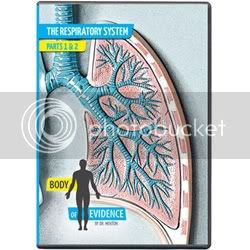 We received The Respiratory System, which is the fifth title in this 8-DVD set.

The DVD consists of a lecture by Dr. David Menton to two high school looking students (one male, one female).  That felt a little forced and awkward, and the students appeared fairly uncomfortable throughout most of the lecture.

In spite of the stilted feel of the "class" we did get a lot out of the presentation.  The suggested ages are 12 and up... and I would tend to agree with the publisher on that.  My ten and younger set quickly lost interest. 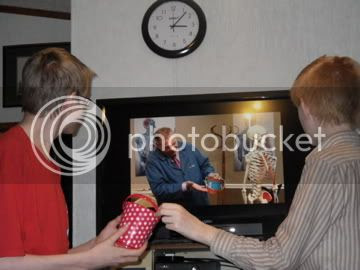 In this scene, Dr. Morton was demonstrating how the ribs curve downward, and in breathing in they behave much like the handle on a sand pail.  They lift up and out, away from the body.  The kids found a bucket to explore that idea themselves.

He uses other props, like a slinky or a balloon, in demonstrating concepts.  He makes extensive use of the skeleton shown above and a life-sized torso with removable parts. Dr. Morton also uses images on microscope slides and computer illustrations.

The DVD covers topics relating to the lungs, ribs and diaphragm, and also the trachea, nose and nasal passages, mouth, and also blood plasma and blood cells. All in about 1 1/4 hours, between the two parts.

What did we think?  We quite often commented with an, "I didn't know that!" throughout the video.  We eventually decided that we really liked Dr. Morton.  But it did take a bit to get past the presentation with the two stiff students.

I will seriously consider other DVDs in this series  Available for $14.99 each, or as a set for $99.95, this is only one of the many resources Timberdoodle has available for science.  I think these DVDs would be great alongside the Apologia: Human Body course.

You can check other reviews of these DVDs here.

As a member of Timberdoodle's Blogger Review Team I received a free DVD in exchange for a frank and unbiased review.
Posted by Debra at 9/09/2011 04:27:00 PM

I've been looking at these for a while and am trying to decide if I want to spend the money. Do you think the akwardness - can't spell - makes it too hokey?

It IS hokey. Campy. What's the other word I came up with? I don't know.

But the information is really good, and I think I mentioned in the review that Dale & I had a whole lot of "I didn't know that!" moments while watching.

Dr. Morton talks about the stuff so casually, so comfortably... and he clearly knows what he is talking about. And he clearly loves teaching.

I am going to seriously look at this next year when Connor does DIVE Biology... (and yes, you've totally sold us on that... we are LOVING DIVE)

I love the Christian point of view. He quotes Bible verses periodically (about breath, about blood) and the great part is that they don't scream "forced" or "contrived" -- it fits in nicely. Okay, for a non-Christian, probably not. I think there was one point where I raised an eyebrow and thought, "You really had to work to fit *that* in, didn't you?"

I think I should have waited another day or two to write up the review, as I'm liking it more as I reflect on it.

I ordered the entire series on pre-sale when it was super cheap and I thought I shouldn't pass it up. I have been somewhat disappointed. You are so right about the students! They just sat there like lumps in the one I've watched. I personally have a difficult time understanding a lot of what is said, although that could just be me and my hearing :) There is no answer key, so if your student uses the study guide, you'll have to watch along with them to know if his answers are correct. In addition, it is impossible to watch and do the study guide at the same time. I've tried it myself. I was constantly re-winding (or whatever you call it for a DVD) to get the answers. VERY irritating and NOT homeschool parent friendly. And some info on the DVD is out of order with the study guide. Lastly, the website that goes along with the course is not up and running...or it wasn't when I tried to go there. An email inquiry (which took many weeks to get a response) told me that they were still working on it. My oldest is 7th grade, so I thought I was making an investment, but I'll probably sell.