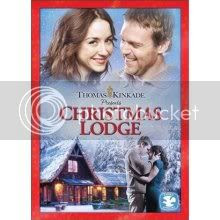 Recently, when offered a chance to review Christmas Lodge, I noticed that it starred Michael Shanks and jumped at the chance.  I thought my family would be interested in viewing this movie, and a family-friendly modern Christmas story sounded wonderful.

My family balked.  "It's October!" they insisted.  "We don't want to watch a Christmas movie.  Ask again in six weeks."

Some people just don't understand.  Doing this as a review means that we have the opportunity to watch it, so that I can talk about it with enough time for other people to get it for that "perfect" time.

So... I watched alone.  Which means you are stuck with only my opinions.  So first, let me tell you what the publisher says:


Thomas Kinkade presents Christmas Lodge: a place where a heart-warming past and loving future meet for one remarkable group of people. During a weekend trip to the mountains, Mary (Erin Karpluk) finds herself at the now- dilapidated lodge where she spent the holidays with her family growing up. She becomes determined to restore the building to its former glory. Inspired by her grandfather and guided by her grandmother in heaven, Mary throws herself into the project, and during the process finds herself drawn to Jack (Michael Shanks), a handsome man who loves the lodge as much as she does. Historically unlucky in love, this chance encounter allows Mary to renew her faith in life and discover her one true love. For an uplifting story about the importance of faith, family and the true holiday spirit, go to the Christmas Lodge.

What did I think?  The movie was a bit on the hokey side, with much of the basic plot being fairly predictable.  But I still enjoyed it.  It is absolutely Christian family-friendly.  A few things that stand out:
The downsides?  For the most part, only the two main characters (Mary and Jack) are really well-developed.  Some of the other people have moments... but they are just written as pretty flat characters.  Some of the plot developments required a LOT of suspension of disbelief.

Still, the message... faith, family, tradition... it makes for a very nice Christmas flick.  It won't replace It's a Wonderful Life as my favorite Christmas movie... but I can certainly see watching it every December.

Disclosure of Material Connection: I received one or more of the products or services
mentioned above for free in the hope that I would mention it on my blog. Regardless, I
only recommend products or services I use personally and believe will be good for my readers.
I am disclosing this in accordance with the Federal Trade Commission's 16 CFR, Part 255:
"Guides Concerning the Use of Endorsements and Testimonials in Advertising.
Posted by Debra at 10/31/2011 10:26:00 PM

Thanks for entering me in the giveaway! :)

In the past, we have spent Christmas with my extended family, or just us here at home.

We like to have a tree, and exchange gifts (usually the night of Christmas Eve), have a yummy meal (sometimes I go all-out with baking, etc.); hubby and the kids will eat turkey, but I usually make something vegetarian as well (since I am).

We like to play table games throughout the day, too. Or sit and watch Christmas videos.

It's A Wonderful Life is my favorite too, but I'd still like to win this one.

My family tradition is to fix steaks and baked potatoes instead of a time-consuming spread w/ meat, seven sides, etc. Whenever I'm in charge of the meal, I continue the tradition.

Christmas is our favorite holiday; although, we are rarely able to celebrate on the exact day due to DH's work. However, he is fortunate enough to be off this Christmas, so we are really excited!

We have 4 kids which could make Christmas morning pretty crazy. But instead we allow one of the older kids to read the true story from the Bible before we open our gifts. It seems to set the tone for the whole morning.
lisa.otis6 at gmail dot com

This looks good.I would love to win it.

Sign me up. My babysitter LOVES these types of movies and I would love to win it to give to her. :)

Dating vs. courtship is closer than I want it to be for my girls!

Ever since I was little, my mom's family - she and her 4 siblings, their spouses, and all the kids - would get together for a weekend of fun and family. We've had 50 or more people crammed into one house before!

Our UNO games were/are legendary - my husband won't even play UNO with us any more! "You people are vicious!" he says.

My family and I enjoy making Stroboli for Christmas Eve dinner and then we would head over to our church for a candlelight service. My blood pressure goes up as I watch all the little kids with candles...

We always get together with most everyone either before or after Christmas day. Since our family has grown bigger, with all of us siblings having our own families, every family brings food for everyone. It's fun and we feel just loved after getting together with the family!

We have a Birthday Party for Jesus and my mom makes the BEST birthday cake!

We loved this movie so much!!

I would love for this to become our new family favorite!

We read lots and lots of Christmas books.

We really have a very small family so we spend it with my son's in-laws.

Hello!
Well, I am a missionary at an orphanage in Mozambique, here in the US right now for a visit. But I have spent every Christmas for the last eight years with between 26 and 48 little 4-8 year old boys, in the dorm that I live in. This year, I have 31 boys! So Christmas is a lot of work and a lot of fun! I would love an easy movie like this to relax too! Thanks for hosting a giveaway!
Lauraleighanderson@hotmail.com

Sounds like a great movie --Michael Shanks was in one of my favorite Sci-Fi shows --it'll be neat to see him in something different. Thanks for the chance to win!

Oops --I should have read the instructions first! My family celebrates Christmas with my grandma and aunty and uncle that live nearby us!

My family loves to watch Christmas movies together! It really helps us get in the spirit!

I'm a Christmas fanatic, so Christmas starts early for us! My husband is less than thrilled about this, but he's a good sport! He's an active duty Marine, so we've spent many Christmas' apart due to deployment, so we treasure the ones we can share together as a family!

My family makes cinnamon rolls & sweet orange rolls on Christmas eve, then we give them to family, freinds & neighbors!

We window shop together and look at all the decorations at the stores, and around the town.
Abby

Every year one of my brother's friend goes from house to house in a santa costume and takes a family picture with us! then we have a nice traditional dinner and pass out in a food coma :)

Christmas is a big deal for all of us in my family but particularly this year! We are in the process of adopting two little boys from Foster Care and we should have them mid December. This will be the first Christmas my husband and I will have with our own kids! We can't wait and are super excited to celebrate with them.

Our family Christms revolves around church and family get togethers. cwitherstine at zoominternet dot net

My husband hates it, but I make him watch a sappy Christmas me everday between Thanksgiving and New Year's. This would be a great treat!

My husband and myself are retired schoolteachers with an empty nest.We are fortunate that our kids can make it home for Christmas. We always go to church Christmas Eve. Christmas morning, no one can go into the living room until everyone is ready. (We still believe in Santa.) We open gifts and have a wonderful Christmas brunch afterward. Both grandmas used to always spend the night but sadly they have passed away.

We watch old Christmas movies as a family as the food is being cooked. We travel to multiple homes and celebrate a few times..lol We're very busy but enjoy it.

we go to church. we make and eat a feast. we open gifts. we watch movies. we drink eggnog. we eat more of the feast. we open the rest of gifts. we snuggle. we enjoy the reason for the season. It is just us two... our families are scattered and far away.

We watch christmas movies from the first of November until after Christmas :)
ashleydangit at gmail dot com

My mom would love thi, she loves watching the Hallmark countdown to Christmas

We do a lot of Christmas baking while listening to Christmas music and take trays of goodies to the neighbors as a family. :)

We go to my in-laws house first and we exchange gifts after we are done we all got to my husband's grandma house and eat dinner with other relatives.We sing carols and more gifts and for the final touch pie!
smlionlamb@gmail.com

We just welcomed identical twins to our family on June first and I have a niece who is due December 9th, so this year Christmas will be a little different!

We plan to start a new tradition this year with "advent presents". Each day our oldest daughter who is 3 will get one Christmas related gift to count down the days until Christmas morning. A Christmas book, coloring book and crayons, craft supplies etc. We also do one Christmas activity a day looking at lights, baking cookies, a craft etc.

We bake together on Christmas eve and watch holiday movies :)

We like to make our own decorations, and love making hot chocolate and driving around town looking at everyones christmas lights.

We get together for Christmas although it might not be Christmas Day or Christmas Eve. With everyone working different hours and days it is hard to come up with a day or time but we work it out and no matter whether it is the actual day or not -- we act like it is! The biggest joy is opening gifts and seeing the grandchildrens reactions.
crochet4hats[at]gmail[dot]com

We have family over for dinner and make gingerbread cookies :) jessicapeeling@yahoo.com

Usually we go to my parents, but we just moved across the country so this year we will be on our own.

We have several got togethers. BIg dinners. Love seeing family

Every year we get together and make gingerbread houses.
Thanks for the giveaway!
Danielle
yellyjohnsen@yahoo.com

We are not a very big family at Christmas, but we have fun. We usually go to church on Christmas Eve, and have an easy dinner. We then open one present, and wait until Christmas morning for the rest. My sons, now 18 and 21, still love getting Christmas stockings filled with goodies; I am not sure I will ever stop that
robinlscott4 at hotmail dot com

Each Christmas eve we act out the Biblical Christmas story then open Christmas Eve presents (pj's).

we started a tradition with our children and hope they carry it on with theirs but we bake Jesus a birthday cake to celebrate HIS birthday.

We bake cookies every year and leave them out woth milk. And the next morning tons of gifts magically appear