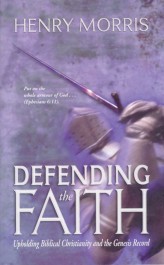 As part of the Master Books Apologetics Review Team, I get the opportunity to review some titles I wouldn't necessarily have picked up on my own.  In July (Yes, I know.  It is August.) I was to review Defending the Faith: Upholding Biblical Christianity in the Genesis Record by Henry Morris.

This has been a tough one for me.  But before we get to that, here is what the publisher says about this book:

When Jude wrote his Epistle, he implored believers in all ages to be diligent in their defense of the faith. And the faith clearly was, and is, belief in Jesus Christ as Creator and Redeemer. So just as Solomon assured us that there is nothing new under the sun, we're not surprised that there are attacks on the gospel today; Jude was just as familiar with these enemies of the gospel in his time.

Now, author Henry Morris offers up a brand-new look at these age-old attacks on the faith, tackling a breathtaking range of issues, from science and the Bible to liberal criticisms of the Bible. A powerful weapon in the battle for truth, Defending the Faith doesn't shrink from the fight, but rather speaks the truth in love.

Sounds great, right?  And I was excited to read it.  "Brand-new look" and "age-old attacks" definitely grabbed me.

The reality, for me, was different though.  I think maybe I've just worked through too many Henry Morris resources lately, but I just became completely bogged down in the language.  At the end of Chapter I: We Must Defend the Faith, Morris goes through a pretty lengthy argument for why King James version is the best English Bible to use.

It was interesting to me, because up to that point in the first chapter, I was having to stop almost every time there was a scripture quote and go look up words so that I could figure out what the verse meant.  I had been thinking how I'm simply not smart enough to comprehend KJV unless I am completely awake and alert and at my absolute best.

After those thoughts, I get to a four-page treatise on why KJV is the only way to go.  This included sentences like, "Apart from a few archaic words which can be easily clarified in footnotes, it is as easy to understand today as it was 400 years ago."

That's about the point I shut the book and decided I needed a couple weeks before I tackled it again.  Well, okay, I did finish the next page to complete the chapter.  THEN I closed it up.


So back into the book a few weeks later, I have to say that taking a break was a good idea.  There is a lot of great stuff in this book.  My favorite chapter was Chapter IV: The Rhetoric of Evolution.  In this chapter, Morris quotes extensively from various evolutionists about the evidence (or lack thereof) for various evolutionary beliefs.  Fascinating stuff.

I do recommend this book, especially if you are one of my many KJV-only readers.  For the rest of us, this is a great resource, and the KJV arguments may make you think a bit.


Disclaimer:   I received this books for free from New Leaf Publishing Group as part of the Master Books Apologetics Review Team program.  No other compensation was received.  The fact that I received complimentary products does not guarantee a favorable review.
Posted by Debra at 8/25/2013 06:30:00 AM