Here is a photo of one of the baskets: 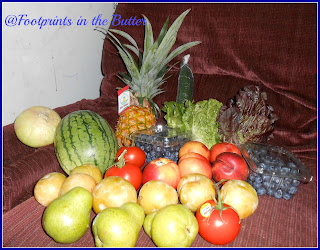 Included in BOTH baskets was:
Plans for this stuff?
The big job of the week is going to be dealing with all the Hatch chilies.  I'm going to be making at least three different types of green chili sauce, and hopefully Dale will love one of them.  At that point, I'll make a LOT of it to can.

I'm also going to be making some salsa (those tomatoes need to be used sooner rather than later).

And I'm going to go searching for some recipes to do stuffed peppers or something...

Maybe later this week I'll post some results.  And depending on how the weekend goes, I might be getting more Hatch chilies next week, as rumor is that they'll be back.

The big ol' box of apples?  That is easy.  Those will be eaten.  I *might* slice up a few for pie or apple crisp or something.  In a few weeks, I might turn what's left into applesauce.  Mostly, though, these will be eaten fresh.

You could make tzatziki sauce with the cucumbers. You could also slice them really thin and drizzle them with olive oil and balsamic vinegar.