The Schoolhouse Review Crew has just had the opportunity to review a couple of fabulous documentary videos about two well-loved figures in children's literature.  I started reading the entire Little House series when I was six, and probably read them all a couple dozen times by the time I was out of elementary school.

That means, of course, that I was quite interested in these Legacy Documentaries videos.  Half of the Crew reviewed Little House on the Prairie: The Legacy of Laura Ingalls Wilder.  I'm going to be talking about the other one though, Almanzo Wilder: Life Before Laura. 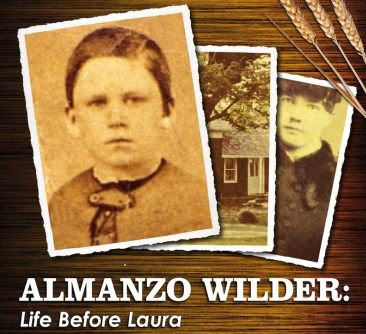 This documentary is a bit less than an hour in total, and there is a great combination of excerpts from Farmer Boy, original photos, and re-enactments that were filmed at the Wilder Homestead.

For those of you who were fans of the Little House on the Prairie television series (I watched the first couple years... before Almanzo), one of the key figures in the production of this DVD is Dean Butler, who played Almanzo in the series and has remained very involved in his story.

You can check out a promo clip here:

This documentary, available for $21.95, is appropriate for any age, but kids who aren't old enough to already be interested in the Little House books probably won't be interested.

My teen boys enjoyed all the little tidbits that were shared throughout the documentary.  From a film-making perspective, they were fascinated by how they had the boy doing the re-creating scenes part of things, with the narrator still talking over it, as opposed to having the kid act it out more fully.  So it just felt more "documentary-ish" instead of like watching a movie.

One son loved the parts with the horse (and I would agree with him on that).

I plan to pull this video out when my kids are studying the mid-1800s in America, so we can put some things in historical context, but I'm sure we will watch it more than just then.

Definitely go check out other reviews of both this and the Laura Documentary!  Good stuff.

Nice review, Debra! I like hearing from your boy's perspectives. It's fun to see what your boys like and compare it to what my girls mention. :)