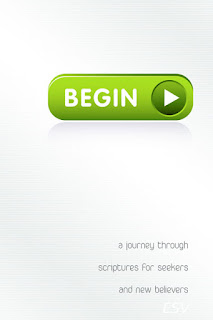 I know when giving new believer's a Bible, quite often what will happen is that they will be handed a New Testament only (and John and Romans are usually suggested) or some will hand out something that is simply the Gospel of John.

That has always seemed like a reasonable place to start... but it is not something I've ever done.  It seems to me like you need some context.  But then handing out a whole Bible can seem a bit intimidating.

Well, Begin gives another alternative.  This fairly thin paperback includes the entire text of John and Romans, but it puts those in context.

The Bible text portion also includes one little shaded box per page of either some background fact, cross-references, or a question.  For example:


Fact:  The Pharisees were a specific group of Jews.  The Saducees were, too.  Each of these groups disagreed about things.  For example, the Pharisees believed in the resurrection of the dead, but the Saducees did not (Acts 23:8).

Periodically, in the Bible portion, there will be a page with a longer question to ponder, and space to write out an answer besides.

In addition to the actual Bible text, in between sections there are a couple pages of summary.  So a page and a half taking us from Abram to the Ten Commandments, two and a half pages from the Ten Commandments through the birth of Christ, two pages from the ascension of Christ through Paul's letter to the Romans, one page about the rest of the New Testament except those last couple chapters of Revelation.

These sections are obviously VERY brief... but they do a really good job of hitting some of the high points of what happens in the remainder of the Bible, and of bridging between the chosen sections.

The final section is a series of a couple page essays on various topics, such as radiometric dating or dinosaurs on the ark.

Overall, I am really impressed with this book.  The majority of the book is actual Bible text, in my preferred version (ESV), and the commentary does add to my understanding without overwhelming the reader with pages and pages of notes.

I think this would be a fabulous book to hand to a new believer.

Disclaimer:   I received this book for free from New Leaf Publishing Group.  No other compensation was received.  The fact that I received a complimentary product does not guarantee a favorable review.
Posted by Debra at 10/23/2011 11:40:00 AM