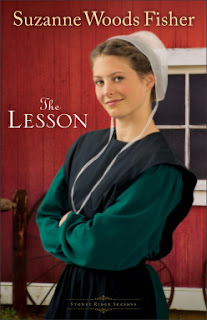 I just finished reading The Lesson, by Suzanne Woods Fisher, which is the third title in the Stoney Ridge Seasons series.  The series follows the stories of three sisters, with each book focusing on one of them.  The Lesson is the story of the youngest Lapp sister, Mary Kate.

I have read the other two titles, but I do believe this one would stand on its own.  There are certainly little pieces of the story that mean more to someone who has read the others, but I really don't believe any of it is essential.  Well, there is at least one major plot twist that you can figure out before the characters piece it together if you are familiar with the series already.  But I'd still say the story stands alone.


Centered on one of Suzanne Woods Fisher's most loved characters, this is the story fans have eagerly anticipated. The precocious M.K. is all grown up (well, almost) and ready to take on the world-with surprising results. Fisher's trademark plot twists and turns are as unexpected and satisfying as ever in this third book in the Stoney Ridge Seasons series.

In her wildest dreams, spunky and impulsive nineteen-year-old Mary Kate Lapp never imagined herself behind a schoolteacher's desk. A run-in (literally) with the schoolteacher compels her to act as a substitute teacher, just as her restless desire to see the world compels her to apply for a passport . . . just in case. The only thing of interest to M.K. in the sleepy Amish community of Stoney Ridge is the unexplained death of a sheep farmer that coincided with the arrival of a mysterious young man into the community. Frustrated that no one takes the crime seriously, she takes matters into her own hands. Unfortunately, as tends to be the case for M.K., she jumps headlong into trouble.

This book was fun to read.  Mary Kate is a great character, and one I could relate to in some ways.  Smart, impulsive, and not really sure that she wants to stay in Stoney Ridge, she makes a great protagonist.

I particularly loved that as part of her job as a schoolteacher, which was thrust upon her, she ends up in the library researching dyslexia.  One of her students is clearly dyslexic, and oh, did my heart go out to him.  He was not a major character, and I would have loved to find out more about what happened in his life.

Fisher writes in a way that makes her characters seem oh, so very real. One thing I enjoy is that being Amish is just one aspect of who the people are -- the story doesn't revolve around their "Amish-ness" at all.  When things happen and the police need to be called (the dead sheep farmer, for instance), the characters head for a public phone without a lot of explanation as to why they wouldn't have a cell phone on them, or even why there isn't a phone in the house.  It is just how it is.

When I reviewed The Haven (book 2 in the series) I talked about the twists and turns of the plot.  Fisher doesn't disappoint in that with this title either.  I especially loved that everything didn't wrap up in a nice little bow.  There were loose ends, and not everyone has a happy ending.

Celebrate the release of The Lesson with Suzanne Woods Fisher by entering to win one of TWO iPads!

Two winners will receive:
Enter today by clicking one of the icons below. But hurry, the giveaway ends on January 20th. Winner will be announced on 1/22/13 at Suzanne's Blog.

Hi Debra! Your review of "The Lesson" was a delight to read--really enjoyed the parts you brought out (the boy with dyslexia). In fact, you gave me an idea! Stay tuned...
And thanks again, Debra, for being such a support. If you find a minute to spare, would you post your review on Amazon? Thank you!!! Suzanne