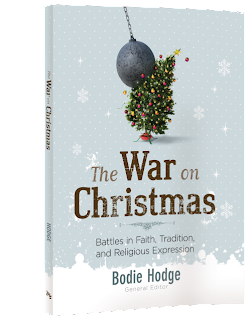 
From the publisher:
Filled with family get-togethers, office parties, breaks from school, decorating the tree, and more, Christmas is a time of peace and love. So why has so much controversy clouded this sacred holiday? It has become ground zero in an ongoing culture war where Nativity scenes are nixed, Merry Christmas becomes Happy Holidays, and even the word "Christmas" is considered by some as offensive. Find the truth about Christmas and the Christian's response to a culture that seems to be declaring war.

I've always had fairly mixed feelings about some things with the celebration of Christmas.  We try to focus on "the reason for the season" in how we do celebrate, which is tough sometimes in the face of far too many not-so-great influences.  For us, that is either people who give the message that Christmas is about getting/giving stuff, or that family (and maybe friends) is the real meaning of Christmas.

I hope every year that we do manage to get the real message across, but I'm never quite sure.  Of course, then I watched this trailer with a certain child of mine, who got pretty much every answer wrong.  (I had them all right, thankyouverymuch.)  Clearly, I have more work to do.

What I thought of the book:  Confession first -- I didn't really expect to learn much of anything, yet I find this book to have changed some of my thinking on Christmas.  A chapter I really liked was Chapter 11: Hark! The Herald Angels Said?  Now, I have heard people criticize the hymn because the Bible doesn't say that the angels sang.  Luke tells us "And suddenly there was with the angel a multitude of the heavenly host praising God and saying: 'Glory to God in the highest, and on earth peace, goodwill toward men!'"

Okay, well, I like the image of a sky filled with singing angels.  They sound a lot like the men's chorus record my parents had from their college days.  Or at least, that is what I hear in my head when I read the verses.  So I was bracing myself to be frustrated for not relying on what the Bible says, and instead bringing in fallible traditions.  The book surprised me.  It goes on to talk about the myriad of Scriptural connections between praising and singing.

I don't agree with absolutely everything I read, but after going through the entire book myself, I have started it over as a read-aloud to my kids.  There is a lot of really good discussion material here.  There is plenty of information about the secular attacks on Christmas, and also plenty about the Christian attacks on the holiday as well.  There were certainly aspects that I wanted to research more, so I can see other perspectives.

The book itself is beautiful.  Great photos and other illustrations, cool backgrounds on some of the pages.  That part is delightful.

One criticism I did have is that there could be a bit tighter editing.  An example is that the issue of the Three Kings comes up in a few different chapters, and each time it is treated as though this is new information. Chapter 10 is about "The Three Kings" and talks about things like the Greek word for magi, how many there were, and when they visited Jesus.  Chapter 15, which is about the Star of Bethlehem, introduces a lot of the same information as though we haven't recently read it.

Really, this was a pretty minor thing, but still, it bothered me.

Overall, this is a fantastic resource, and reading through the 23 chapters (plus the introduction and conclusion) seems like a perfect new Advent tradition for my family.

You can see what other launch team members had to say about The War on Christmas too.

Disclaimer:   I received this book and a t-shirt for free from New Leaf Publishing Group as part of The War on Christmas Launch Team.  No other compensation was received.  The fact that I received complimentary products does not guarantee a favorable review.
Posted by Debra at 10/28/2013 11:30:00 PM