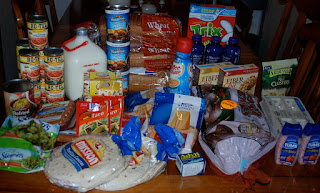 In case it isn't obvious in the picture (I know, it isn't), there are 4 8-oz packages of cheese in there, and three packages of I Can't Believe It's Not Butter.  And one bottle of water was consumed on the way home and not in the photograph.  I think everything else is clear enough.

For full disclosure, though, the Advil and Tums were purchased with our flexible spending account credit card, and are not included in the total.  We just had to toss a bunch of medications due to the Tylenol & Rolaids recall, so I replaced that with what was on sale.

And the kids LOVED the Trix.  Told them not to expect it again anytime soon, but for $.33, who could resist?

Wow! You did great! I really miss my days of ripping off the grocery store now that I have to buy allergy-friendly foods...I think the potatoes are the only things in your picture we can eat. Oh, and we can only eat those twice a week. Thanks for letting me enjoy your money saving!

Oh, I am SO grateful I don't have to be too picky with allergies. The only thing I avoid is melons -- and even those, I end up purchasing as long as I know someone besides me will prep and serve it. I try not to even touch the juice.

Jacqueline -- yeah, there was a pretty good sized recall in January. We had four recalled products in our house. So replacement coupons are on the way, I guess. It's a voluntary recall, but... well, we had started the Rolaids, and I was already considering tossing them because something just seemed off with them. When I read about the recall, I decided we were dumping it all.

You did really great! I miss the days when I could do well on grocery shopping--combining sales with coupons. I also used to shop a salvage (dented boxes and cans store). I used to get the best deals there! Even with 4-5-6 of us eating, I used to be able to feed us on $200 or $250 a month. No longer. :(