I didn't know a whole lot about Kinderbach when I found out that I was going to receive a three month subscription to their website.  It is billed as a program for 3-7 year olds.  I have two of those (Trina is nearly 4, Richard is rapidly approaching 6), and I have three older and not terribly musically literate boys too.

So... I recruited the older three to do the teaching.  Sneaky, huh?  I figured that if they are "hired" as teachers, they will learn a bit too.  And I think it worked great.

Basically, Kinderbach is a series of online piano lessons, using some great little characters.  The kids are learning some musical theory, they are learning where the notes are on a real keyboard (not one with stickers or colors or anything else fancy).  While it is video based, the program does have the kids taking a very active part.  You do need a piano or keyboard.

The online version does not work with my Mac, so we had to have the PC desktop powered up to use the program.  That was a bit of a problem for us, and kept us from using it as consistently as I wish we had.

How did it work here?  Well, I really do like this program, and I wish we could continue with it.  That being said, well...

Katrina learned quite a bit, and she thought the characters were adorable, but we probably needed to move at a slower pace for her.  I'm thinking another six months (so age 4.25 instead of 3.75) would have made a world of difference for her.

Richard on the other hand really, really enjoyed the program, and he learned a lot.  He knows the keyboard reasonably well, and learned a lot of other things about pitch and patterns.  I think he was at about a perfect age for the program (he was just over 5.5 when we started). 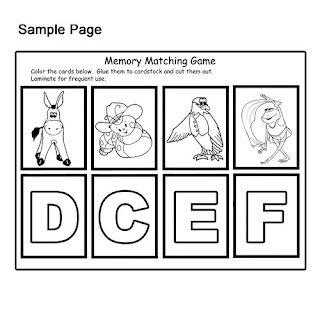 One thing I really liked was that although terms and concepts are introduced using "cute" characters and names, they naturally transition to a more "adult" level.  For instance, after learning to associate the keys with characters (Edward Eagle, for instance, is the white key above the two black keys), they do work on learning that the key is also known as E, through activities such as the memory game shown above, or the music shown below (if you can't see it, there are itty bitty characters incorporated into the musical notes). 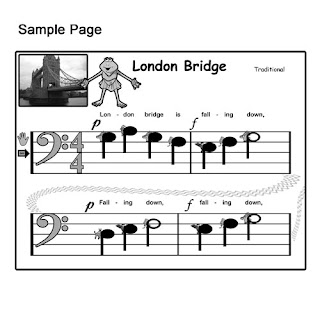 My older boys would argue with me about it, but they learned plenty too.  Connor became convinced that he wanted to learn to play the piano for real.  Hopefully, soon, I will be able to get some music books.

There are samples available online, and I'd highly recommend trying out the first two weeks.  But I was more impressed with the later weeks, just for your information.  The first 2-3 weeks of lessons involved a bit of eye-rolling from my kids, but it laid a great foundation for what came later.


And you can check out what my fellow crewmates have to say about Kinderbach at:

Disclaimer:  As part of the TOS Homeschool Review Crew, I did receive a free three month subscription to the Kinderbach website.  The fact that I received a complimentary product does not guarantee a favorable review.  It does guarantee a review. A fair review. But I am not going to praise something unless I think it deserves the praise.  If I don't like it, you'll hear that.  And hopefully with enough detail as to why so you can decide for yourself if what I hate about it makes it perfect for your family.  For more about my take on reviews, visit my blog post here.

Sounds good, but WHOA! it is expensive! Do you think it's worth $20/month to get music instruction into our school?

I do think in general it would be worth $100 for a year. Not in my budget right now though.