Book Review: One Race, One Blood 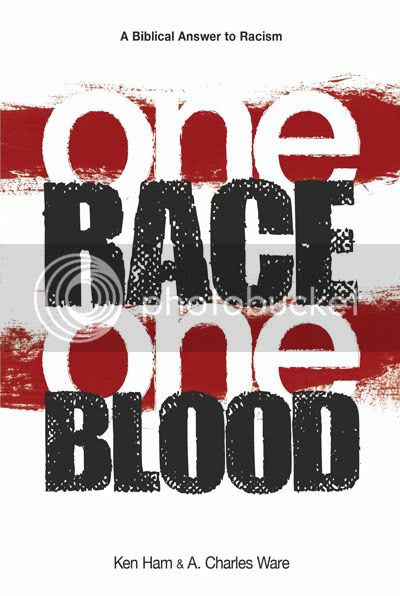 One Race, One Blood by Ken Ham and Charles Ware was a pretty quick read, once I sat down to actually read it.  The book itself is 163 pages, with a lot more in the appendices.


It is a rarely discussed fact of history that the premise of Darwinian evolution has been deeply rooted in the worst racist ideology since its inception. This significant book gives a thorough account of the effects of evolution on the history of the United States, including slavery and the Civil rights movement, and goes beyond to show the global harvest of death and tragedy that still finds its roots in Darwin’s destructive writings.

The tragic legacy of Darwin’s controversial speculations on evolution has led to terrible consequences taken to the deadliest extremes. One Race One Blood reveals the origins of these horrors, as well as the truth revealed in Scripture that God created only one race.
You will discover:

• Nazi Germany used evolutionary concepts to justify the extermination of “unfit” people groups such as Jews, Gypsies, and Slavs
• The origins of people groups, the genetics of skin color, and the biblical truths on “interracial” marriage
• Eye-opening discussion on racism and its roots in the hearts and minds of millions still today.

Within these compelling pages, Dr. A. Charles Ware, president of Crossroads Bible College, and Ken Ham, president of Answers in Genesis examine the historical roots of racism that have permeated evolutionary thought, and the Bible’s response to this disturbing issue. This is a crucial and timely study that profoundly addresses the Christian worldview regarding “race” from a compassionate and uniquely compelling perspective.

A lot of this information was not new for me, which probably helped make it a quick read.  If you haven't read/seen other materials on evolution and racism and on the biblical view of races, you might need more time to ponder the content.

One aspect I liked was the idea that as Christians we need to ban the term "race" from our vocabulary and start seeing past the little surface differences between people.  It made me laugh, though, as I thought about how difficult that is.  Even if we really want to.  It seems like everything, everywhere is constantly trying to split people up and categorize us all by what shade of brown we are.  And if you can't tell by the photos on this blog, I'm one of the people who has had all of the melatonin-producing genes bred out of me.  Except for the freckles.

Disclaimer:   I received this book for free from New Leaf Publishing Group.  No other compensation was received.  The fact that I received a complimentary product does not guarantee a favorable review.
Posted by Debra at 2/24/2011 11:47:00 AM

As a minority I have always discouraged people from pretending we Re l the same. We were created with these differences. I believe equality; True equality, is when all the peoples of the earth are seen as equals with our differences. I think when we try to pretend we are not different then we as humanity are missing an important lesson. I believe it is the same with Women's rights. I am not equal to a Man by wearing a suit and doing and dressing as a Man. I am equal when being a Woman is as respected as being a Man.

I would agree with you about pretending we are the same. So does the book, actually. I did a lousy job of talking about that.

What they are emphasizing is that instead of a "red and yellow, black and white" thing we look at people groups -- and the REAL differences between them. Culture, traditions, etc.

Dr. Ware definitely makes the point that we can't just pretend we're all the same... we are not all the same. But our real differences are not primarily genetic.

Thanks for the clarification. That sounds like a good point he makes although culture and race are often tied together they are not the same. I made the point because I really hope that one day we will each be seen as equal with our differences. And yet in some way our differences are very similar.