Okay, so I've been whining a lot lately.  Some is with good reason, I know.  But somewhere, somehow I do need to pull myself out of this slump.

So yesterday was wonderful.

I got up in the morning, and my new coffeepot WORKED.  Dale had to exchange the first one -- and since the price dropped in between, he got a working coffeemaker AND a buck back.  I know, I shouldn't base my day on whether or not I get coffee first thing, but it was so peaceful and just plain nice.

I have kids who aren't feeling all that great, but Thomas and Trina were up to heading to town with me.  We went to Target, where they were doing a kids' storytime, including giving away some gift bags.  My photos aren't fabulous, but here are a couple: 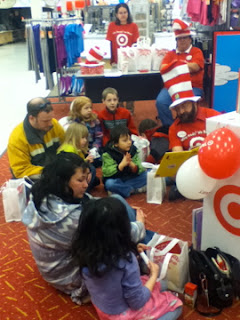 A group shot of the reading of One Fish, Two Fish. 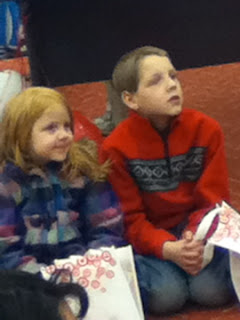 A bit closer up! 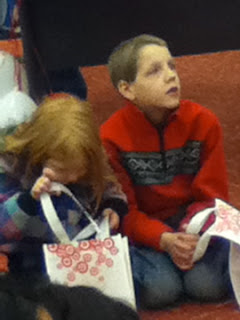 And Trina checking out her gift bag!

The kids had fun and heard 2.5 books.  We shopped a bit, then headed for Barnes & Noble, where I checked out the color Nook.  Oh, wow, are those ever neat!  We also hung out in the kids' book section (I looked over some Phineas and Ferb books) and then we grabbed coffee and hot chocolate.

Then we were off to a ministry in town.  Crossfire Ministries gives out food, clothing, toiletries and Bibles... and they have a variety of other outreach efforts.  We've been involved with them in the past, but their horrid location and their very limited hours made it difficult.  They've been blessed beyond measure with a new building, and they were doing an open house and tour.  Wow, wow, wow... The new building is huge and amazing and there is parking, and wow...

And they now have Saturday hours... so tomorrow, I'll be looking into the possibility of us being able to do some volunteer work there.  Any ages... so I can get Trina involved, not just my biggest two.  Thomas was really impressed and he wants to help.

We headed over to Michael's, where we were able to pick up charcoal pencils for the art DVD we are reviewing, and also to pick up Extreme Colors colored pencils -- those are for the projects on another art DVD by the same company.  Thomas bought the Extreme Colors pencils, because he is just loving doing this.  I love their 40% off coupons.

We headed next door to the Petco, and had a ball looking over all the pets.  They even had a tarantula for sale.  We checked out snakes (no way are we getting a pet snake!), lizards, frogs, turtles, fish, crabs... and we spent a lot of time looking at mice, hamsters and gerbils.  Told Trina that she needs to prove herself with a hamster before we'll consider fulfilling her wish for a chinchilla.  We found some adorable hamsters that I don't know that I've seen before... Djungarian Hamsters.  We're thinking about it...

That is when I realized that I totally forgot that we were supposed to go to the bookmobile... and at this point, there was no way we'd make it.  We decided we better finish up though... so we grabbed a sandwich at KFC, stopped by Walgreens for potting soil, and headed to Walmart, where the kids spent gift cards, I grabbed some seeds, and we picked up some tortillas and eggs.

It was just NICE.  Yes, we ran some errands.  But we relaxed too.  It has been a really long time since I've been out just being out, and not racing from one thing to the next, not having time enough to get it all in.

It sounds like a fabulous day! I'm so glad you are able to get out and enjoy it.

Heidi -- see, I just do NOT want a snake. Mice are off limits too. I encounter enough of both just walking around outside (though the mice have been pretty non-existent since the cat adopted us) and I will not pay to feed them.

LOL, of course, ummm, a year ago I would have told you that there was no way I was going to keep a tarantula as a pet either.

I just have to say -- snakes do make easy pets! I still have custody of my now grown son's corn snake. You don't have to do much to keep them healthy; they don't require a kennel on vacation; they don't make noise; they generally have no odor. What's not to like about pet snakes! :)