Timelines -- what do you use for High School

I had a conversation with Connor last week.  About timelines.  I told him that he does not have a choice:  he will keep a timeline for his high school years.  Period.

He informed me he does NOT want to be cutting and pasting "stupid timeline figures" into some book and he thinks the whole thing is rather idiotic. (Too bad I can't get him to tell me what he really thinks, huh?)

I explained to him my thoughts about timelines.  Basically, I want him to have a reasonably permanent record of his high school history studies, and I think there is a lot of value in having some type of book where you can be making associations between things going on in various parts of the world, or in different spheres -- what types of music might Napoleon have listened to, for instance?

He reluctantly agreed that there probably is some value in a timeline, but still insisted he didn't want to cut, paste and assemble (you do know that is what CPA really stands for, don't you?)  We agreed to spend some time next week (in other words, THIS week) researching some possibilities and picking something. 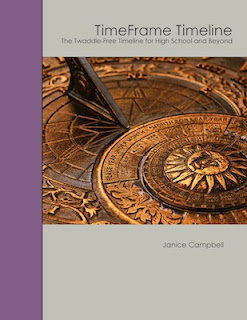 So what should appear in my inbox this morning?  A link to a new product from Janice Campbell.  TimeFrame: The Twaddle-Free Timeline for High School and Beyond.  Can you believe it?  There isn't a lot up on the website yet... but we love her English 1.  I want to see samples or something before I shell out $30-ish on this (with shipping).  But he liked the looks of it.  Twaddle-free was a big selling point.

We have a copy of "We Signed the Declaration When Beethoven Was Five" ( http://www.rainbowresource.com/product/%93We+Signed+the+Declaration+When+Beethoven+Was+Five%3F%94%3A+A+History-Line+as+You+Learn/020115/1298401750-2036907 ), which looks like it uses the same concept as the one you're considering. I'm using that one for my youngest. I've also printed off copies for my older three of the Book of Centuries, which is a free download, at Simply Charlotte Mason ( http://simplycharlottemason.com/timesavers/book-of-centuries/ ). Sometimes we use cut and paste figures in that, but not always. I also have the timeline from Five in a Row ( http://fiarhq.com/fiveinarow.info/digitaltimeline.html ) which would be more appealing to elementary ages. Hmmmmm, let me see; I might have one or two more around here somewhere! LOL

This one looks interesting, too: http://www.thehomeschoolshop.com/sh-timelines.htm

Are ya overwhelmed yet? ;-)

I'm very, very tempted to get that planner, but I'd love to see more pictures. I really like the way that it shows the entire length of something. I struggle with our Book of Time b/c the pictures don't always help you see who overlaps what.

I know you promised me a review of this timeline sometime, and I'm trying not to beg. Can you just give me a thumbs' up or a thumbs' down? I don't have to know all the details. :)