Dale has been after me to teach the kids Spanish for a very long time.  Living in the Southwest especially, a basic knowledge of Spanish would be a wonderful thing.  My problem is that I don't know Spanish, and everything I look at is either:
So when I had the chance to review an online Spanish program for little kids, I was very interested.

Speekee is a video-based immersion course.  All the speaking is in Spanish, starting from the first video (English subtitles are available).  There are a total of ten videos, each 15-20 minutes long, and they are FUN!

Richard and Trina were the ones primarily watching this, and I have to say that Trina loved it more than her brother. 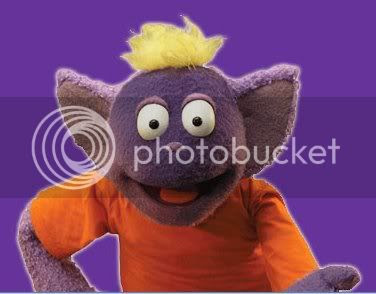 The basic idea is that you watch a video (we watched it several times over a week or so) and you interact with the puppets (including Speekee) when directed.  You watch several children doing various things.  And there is one main grown-up (Jim) who models correct conversation with Speekee.  Everyone involved on-screen is a native Spanish speaker, and the locations are Spanish as well.

In addition to the video, there are some worksheets that can be printed, and some suggested activities.  And -- if your house is anything like mine -- the songs will be sung over and over outside of "class time" which further reinforces the Spanish.

My perspective:  The kids were absolutely adorable, and most spoke fairly slowly and deliberately, which was perfect for this kind of a show.  The songs were catchy.  It felt a lot like watching Sesame Street sometimes, in that "clearly this is meant to appeal to the kids" kind of a way.  I learned (or re-learned) a fair amount of conversational Spanish though.

One thing that was really fun?  The kids were given Toy Story 3, which we had not seen, during the review period.  For those of you who aren't familiar with the movie, one thing that ends up happening is that the toys have to reset Buzz... and they accidentally reset him in "Spanish Mode."  That whole scene is fabulous, but the point:  Richard and Trina actually understood a fair amount of what "Spanish Buzz" said!  Not all of it, but a surprising amount.

I love that you can get this as a monthly subscription for only $7.50 per month.  No commitments, cancel any time.  So you could subscribe for a month or two for a really reasonable price.

Now, let me tell you about what my kids thought:

Trina, age 4, absolutely adored this.  She begged to watch it, and she begged to re-watch episodes.  She really didn't like the worksheets, so I didn't have her do much (if anything) with them.

Richard, age 6, liked it.  But he was totally content to watch a video once and not see it again.  He didn't beg to "do Speekee" like his sister.  But he didn't complain either.  And he clearly learned a fair amount of Spanish.

Thomas, age 10, didn't really watch on a regular basis, but what he did see, he thought was incredibly dumb.  He confessed that some of the songs were "okay, I guess" and that they did help him to internalize some Spanish.  But he was not willing to be a participant as such (I left it TOTALLY optional for the big kids).

William, age 12, and Connor, age 13, pretty much shared an opinion.  They thought it was silly and kind of fun.  They both commented on being impressed with how much Spanish they could fit into these segments, especially given that everything is repeated so much.  And they thought it was a great way to do a language program for younger kids.  They were both (Connor moreso than William) willing to sit with the little two for the videos, and they were both able to then encourage the younger ones in their Spanish use.

You can check out what some of my fellow crewmates had to say at:

Disclaimer:  As part of the TOS Homeschool Review Crew, I did receive complimentary access to the Speekee program.  The fact that I received complimentary products does not guarantee a favorable review.  It does guarantee a review. A fair review. But I am not going to praise something unless I think it deserves the praise.  If I don't like it, you'll hear that.  And hopefully with enough detail as to why so you can decide for yourself if what I hate about it makes it perfect for your family.  For more about my take on reviews, visit my blog post here.