Book Review: The Mountains Bow Down 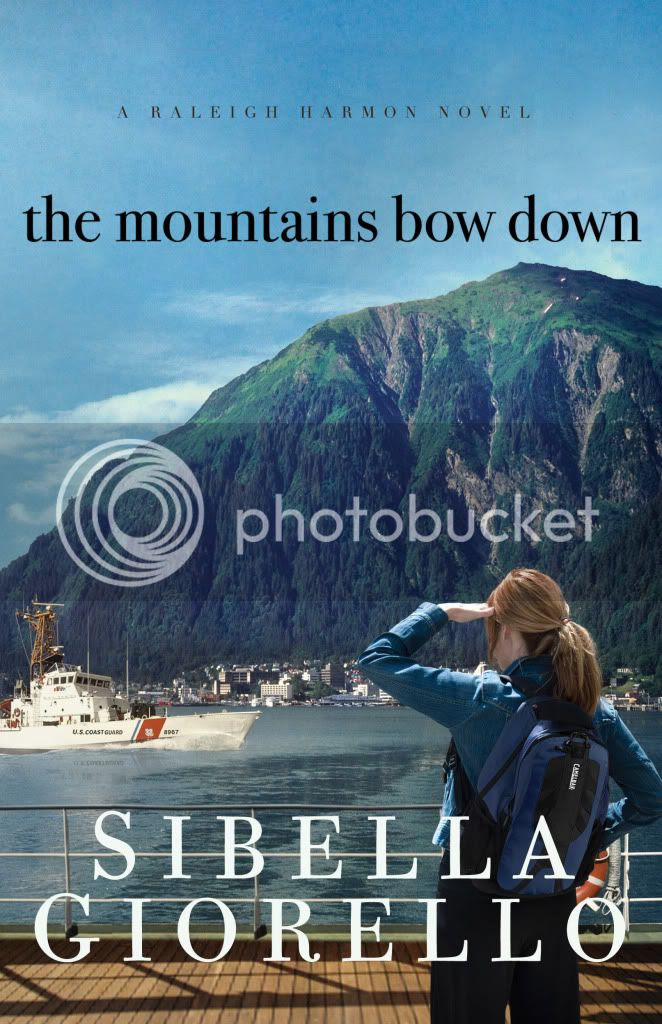 It is time for another LitFuse Blog Tour.  This time, the book is The Mountains Bow Down by Sibella Giorello.  This is the fourth book in the Raleigh Harmon series, and it is the best one yet.

I also participated in the Tour for the third book (The Clouds Roll Away) and I did read the first book on my own.  While the books certainly can stand alone, I think that this book was far more enjoyable because I already knew the back story.

And Oh, My!  Isn't the photo here just beyond beautiful?  I stared at that for the longest time and dreamed of an Alaskan cruise.  <sigh>  Though I want one with far less drama than the one Raleigh embarks upon.


From the Publisher: Everything's going to work out. Time away always makes things better . . ..

That's what FBI Special Agent Raleigh Harmon believes as she boards a cruise to Alaska. A land of mountains and gems and minerals, The Last Frontier is a dream destination for this forensic geologist who's hoping to leave behind a hectic work schedule and an engagement drained of romance.

But when a passenger goes missing and winds up dead, Raleigh's vacation suddenly gets lost at sea. The ship's security chief tries to rule the death a suicide, but Raleigh's forensics background points to a much darker conclusion: Somewhere onboard, a ruthless murderer walks free.

Engulfed by one of her toughest cases yet, Raleigh requests assistance from the FBI and receives her nemesis-perpetual ladies man Special Agent Jack Stephanson. As the cruise ship sails through the Inside Passage, Raleigh has five days to solve a high-profile murder, provide consultation for a movie filming onboard, and figure out her increasingly complicated feelings for Jack-who might not be such a jerk after all.

And that's only her work life. Family offers even more challenges. Joined on the cruise by her mother and aunt, Raleigh watches helplessly as disturbing rifts splinter her family.

Like the scenery that surrounds the cruise ship, Raleigh discovers a situation so steep and so complex that even the mountains might bow down.

My thoughts:  I already stated that I think this is Sibella's best book yet.  She has a knack for making the characters feel real.  Pretty unbelievable things happen, but the wonderfully flawed people in this story are fantastic.  I love characters who don't always do the 'right' thing, and I love them dealing with consequences for doing something they knew they shouldn't be doing.  I have the chance to ask myself a "what would I do?" question or two.

I love a crime story that involves science.  And Sibella certainly knows her geology.  Being from Alaska, I'm assuming the geography was accurate too, at least is sounded that way to me.

This is a fabulous book.  Christian, but not preachy.  Like the previous books in the series, everything doesn't wrap up into pretty little packages at the end with everything being perfect and happily ever after.  The series is too real for that, which is something I really love.  I cannot wait to find out more about what happens to Raleigh...


Sibella’s celebrating the release of The Mountains Bow Down with a blog tour, a Cruise prize pack worth over $500 and a Facebook Party! Don't miss a minute of the fun.

One Grand Prize winner will receive:
To enter click one of the icons below. Then tell your friends. And enter soon - the giveaway ends on 4/1! The winner will be announced at Sibella’s Raleigh Harmon Book Club Party on FB April 5th, 2011! Don’t miss the fun – prizes, books and gab!

About the Facebook Party: Join Sibella and fans of the Raleigh Harmon series on April 5th at 5:00 pm PST (6 MST, 7 CST & 8 EST) for a Facebook Book Club Party. Sibella will be giving away some fun prizes, testing your trivia skills and hosting a book chat about the Raleigh Harmon books. Have questions you'd like to chat about - leave them on the Event page.

Disclaimer:  I received this book through the LitFuse Blog Tour.  No other compensation was received.  All opinions expressed in this review are my own.
Posted by Debra at 3/16/2011 06:00:00 AM

Alaskan Cruise? Forensic Geologist? Oh my.. I think Emily and I are going to have to read this book! Thanks for the review!

Start at the beginning. The books are fabulous, and I should have thought to recommend these when you asked about Em & geology...

The Stones Cry Out, I'm pretty sure, was the first one. It's good -- but they get better...

I reviewed this book and enjoyed it too. Have a great weekend! :O)

So glad you enjoyed it!