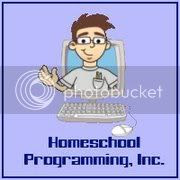 One of the things that Connor keeps coming back to when discussing the "what do you want to be when you grow up" question is the idea of computer programming, and particularly game programming.  When we were plotting out his potential high school course of study, he insisted that we block off a credit for computer programming.

Seeing as I know virtually nothing about anything like this, I kept my eyes opened, and I hoped.  I hoped something would come along that would let him teach this to himself and it would be something painless for me.

Enter:  Homeschool Programming.  When I found out we'd be reviewing their entire Teen Coder series, I was thrilled -- and Connor was ecstatic. 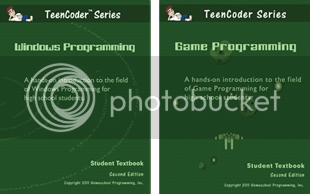 It has been perfect.

Okay, so the TeenCoder series consists of two "courses" that are each perfect for a one-semester high school course.  The first course is Windows programming, the second is Game Programming.  Each course consists of two books -- a student textbook, and a Teacher's Edition.  The student book is meant to be self-teaching, which was wonderful.  The Teacher's Edition contains a SHORT chapter summary, an easy-to-understand explanation of the student project for that chapter, a test and the answers.  The Teacher's Edition also contains a disk with pdf files of the chapter tests and loads of help files.

I'll talk a bit about the Windows Programming course, but note that the Game Programming one is very similar.  We just didn't get that far.  I was hoping Connor would complete the final project from chapter 17 for Windows Programming before I had to write the review, but it looks like his computerized chess game won't be complete until the end of this week.

So, what does a typical week look like when using this program?  Well, Connor tended to do all of the chapter reading in one day, which typically took an hour or so.  Towards the last third of the course, he'd generally spread that over two days, and at that point he'd be making an effort to find somewhere quiet so he could focus. The text is written TO the student, and mostly in a pretty engaging style.  Connor would spend another day working on the hands-on part.  On the PC, he would work with C# programming language (via a free downloadable program).  The assignments increased in difficulty through the semester, but Connor never felt overwhelmed or unsure as to how to proceed.  Sometimes the programming part would take a couple of days, but he was usually doing that in just one day.  The last step was to take the short chapter tests.  Connor would have preferred to skip this part, to be honest, but he really didn't complain.

The greatest part?  Everything is so well laid-out that he never really had to come to me with questions.  Oh, that part is marvelous.  And Connor has loved it.  He feels he is learning a lot.  One thing he really appreciates is that the assignments did require him to think and figure stuff out for himself, but they built logically on what had been presented or demonstrated in the chapter.

The only complaints we really had really didn't directly relate to the course.  We struggled to get started as after installing the C# program onto the computer, something happened to it.  When we tried to reinstall it, our PC suddenly stopped talking to our network, so we no longer had internet access.  Without that bump, Connor would have started the Game Programming course before I had to write this review.

The Game Programming Course adds on to the C# programming that your high schooler has learned in Windows Programming, and includes the use of Microsoft's XNA Game Studio.  The Game Programmer course has fifteen lessons which culminate with the creation of a bumper cars game.  According to the website, learning the XNA Framework will also allow the student to program games for the Xbox  360 with a little extra effort.  I haven't told Connor that part yet.

If you aren't quite to high school yet, they also have a Kid Coder series which uses Visual Basic instead of C#.  This is also split into two courses, Windows Programming and Game Programming.

Teen Coder can be ordered for $75 per level, or $130 for the entire year.  Note: The Crew received the first edition for review.  Since that time, a new version has been made available for sale.  This 2nd Edition is easier to get started with and did replace some of the projects.  (I wonder if the easier start-up would have fixed our initial installation bumps?)  However, the course I reviewed is substantially the same as the one you can now purchase.


You can check out what some of my fellow crewmates had to say about Teen Coder or Kid Coder at:

Disclaimer:  As part of the TOS Homeschool Review Crew, I did receive the Teen Coder series from Homeschool Programming.  The fact that I received complimentary products does not guarantee a favorable review.  It does guarantee a review. A fair review. But I am not going to praise something unless I think it deserves the praise.  If I don't like it, you'll hear that.  And hopefully with enough detail as to why so you can decide for yourself if what I hate about it makes it perfect for your family.  For more about my take on reviews, visit my blog post here.
Posted by Debra at 3/28/2011 08:08:00 AM

It's good to know that he was able to work through it on his own. My son did need to ask questions of our programming friend and our friend worked through both courses in their entirety and thought students would need a mentor or the TM in order to complete the course. Glad to know this is not the case for everyone, it probably depends on your learning style. It seems Connor does have an intuitive grasp of the material, which is great! :-)

Gregory had some c# in college and Timothy is learning it right now in our home school. He is teaching himself from several different resources. Greg was over on the weekend and they had a great time talking programming. I will keep this resource in the back of my mind should it seem we need it. Thanks for the review.

I appreciate the review!