Book Review: A Trail of Ink 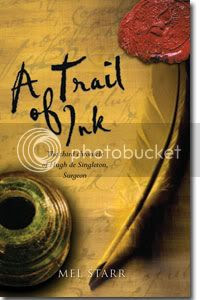 The LitFuse Blog Tour for Mel Starr's A Trail of Ink has begun, and I love being a part of this!  I enjoy historical fiction, I enjoy a good whodunit, and I enjoy Christian fiction.  This book in all three.  What would CSI look like in 1365?

About A Trail of Ink:

An excellent medieval whodunit by the author of The Unquiet Bones and A Corpse at St Andrew's Chapel.

Some valuable books have been stolen from Master John Wyclif, the well known scholar and Bible translator. He calls upon his friend and former pupil, Hugh de Singleton, to investigate. Hugh's investigation leads him to Oxford where he again encounters Kate, the only woman who has tempted him to leave bachelor life behind, but Kate has another serious suitor. As Hugh's pursuit of Kate becomes more successful, mysterious accidents begin to occur. Are these accidents tied to the missing books, or to his pursuit of Kate?

One of the stolen books turns up alongside the drowned body of a poor Oxford scholar. Another accident? Hugh certainly doesn’t t think so, but it will take all of his surgeon's skills to prove.

So begins another delightful and intriguing tale from the life of Hugh de Singleton, surgeon in the medieval village of Bampton. Masterfully researched by medieval scholar Mel Starr, the setting of the novel can be visited and recognized in modern-day England. Enjoy more of Hugh's dry wit, romantic interests, evolving faith, and dogged determination as he pursues his third case as bailiff of Bampton.

I thought the book was a little slow going at first, and worried that I had made a mistake in agreeing to review this.  But once the basics were established, the pace picked up.  Then, I had a tough time putting the book down.

Hugh de Singleton is an incredibly likeable character.  Educated, yet not at all puffed up with his own importance, I definitely found myself pulling for him in his attempts to woo Kate and in his attempts to find the stolen books.

This is a book I think my boys would enjoy too, but with them I plan to start with the first book, The Unquiet Bones.  Two of my guys are studying the middle ages this year, and I think this will make for a fun read-aloud.  I've included Mel Starr's biographical information below mostly because he just looks like someone who I would have loved to have had as a history teacher.  The other reason is that in reading the book, it just felt so realistic in the details about medieval life, the descriptions of the food (if only the book included some recipes!), and the social structure -- and in looking over the biographical info provided, it just seemed so natural that this guy would pull that off.

Some features I really loved about the book included a map of Oxford from 1375 (which is a decade after the story), a glossary of terms, and an afterward that talked a bit about the historical facts and information about what some of the locations are called today.  All of these added to the authenticity of the story. 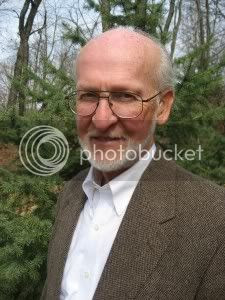 Mel Starr was born and grew up in Kalamazoo, Michigan. After graduating with a MA in history from Western Michigan University in 1970, he taught history in Michigan public schools for thirty-nine years, thirty-five of those in Portage, MI, where he retired in 2003 as chairman of the social studies department of Portage Northern High School. Mel and his wife, Susan, have two daughters and seven grandchildren.

Disclaimer:  I received this book through the LitFuse Blog Tour.  No other compensation was received.  All opinions expressed in this review are my own.
Posted by Debra at 3/05/2011 09:34:00 AM

I have put it on my TBR list. Thanks! I hadn't heard of this book.

I really enjoyed this book too. Can't wait to get my hands on his other books. :O)