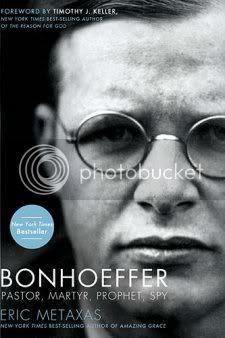 Eric Metaxas accomplished something incredible in this biography of Dietrich Bonhoeffer.  Bonhoeffer: Pastor, Martyr, Prophet, Spy reads more like a novel than a biography in many places, and even though it weighs in at 624 pages, I found it compelling and incredibly difficult to put down.


From the New York Times bestselling author of Amazing Grace, a groundbreaking biography of Dietrich Bonhoeffer, one of the greatest heroes of the twentieth century, the man who stood up to Hitler.

A definitive, deeply moving narrative, Bonhoeffer is a story of moral courage in the face of the monstrous evil that was Nazism.

After discovering the fire of true faith in a Harlem church, Bonhoeffer returned to Germany and became one of the first to speak out against Hitler. As a double-agent, he joined the plot to assassinate the Führer, and was hanged in Flossenberg concentration camp at age 39. Since his death, Bonhoeffer has grown to be one of the most fascinating, complex figures of the 20th century.

Bonhoeffer presents a profoundly orthodox Christian theologian whose faith led him to boldly confront the greatest evil of the 20th century, and uncovers never-before-revealed facts, including the story of his passionate romance.

I've read and heard about Dietrich Bonhoeffer for years, and knew the basic story.  Metaxas brings it to life, though, and brings in so much from Bonhoeffer's writings, and the words of those close to him.  This biography is full of detail, and while I admired Bonhoeffer before (which is why I requested this book) I am coming away with a deep respect for him and his entire family.

One reason I requested this book was so that I could hand it to my teen to read alongside his World War II studies.  Because of the length of this biography, I think that I will wait and have him read it as a high school junior when he is studying 20th Century History instead of "just" world history.  This does make my "must read" list for my children.

Metaxas appeared on Focus on the Family to discuss Bonhoeffer back in early May.  I saved those podcasts, and now am really glad I did.  The podcasts are far more accessible for my kids at this time, though the podcast may convince Connor to tackle the book now.

I'm going to be looking into another book by Eric Metaxas, Amazing Grace, as William Wilberforce is someone else I really admire.  Assuming Metaxas did at least half as thorough a job, that book will be well worth reading.

Disclaimer: As a Booksneeze Blogger, I did receive this as an ePub book from Thomas Nelson. No other compensation was received. For more about my take on reviews, visit my blog post here.
Posted by Debra at 8/09/2011 04:30:00 PM

This sounds like a really interesting book, Debra. I think it would fill in World War II studies really well. I may need to buy that for my high schooler the next time we hit the WW II era in our history studies.