R&R Games sent out a couple of different games to reviewers.  I had the chance to review Pig Pile! with my kids.  Oh.  What.  Fun.

Intended for 3-6 players ages 7 and up, we (of course) didn't completely follow their suggestions.  Trina (age 5) has been involved in virtually every game played in the family. 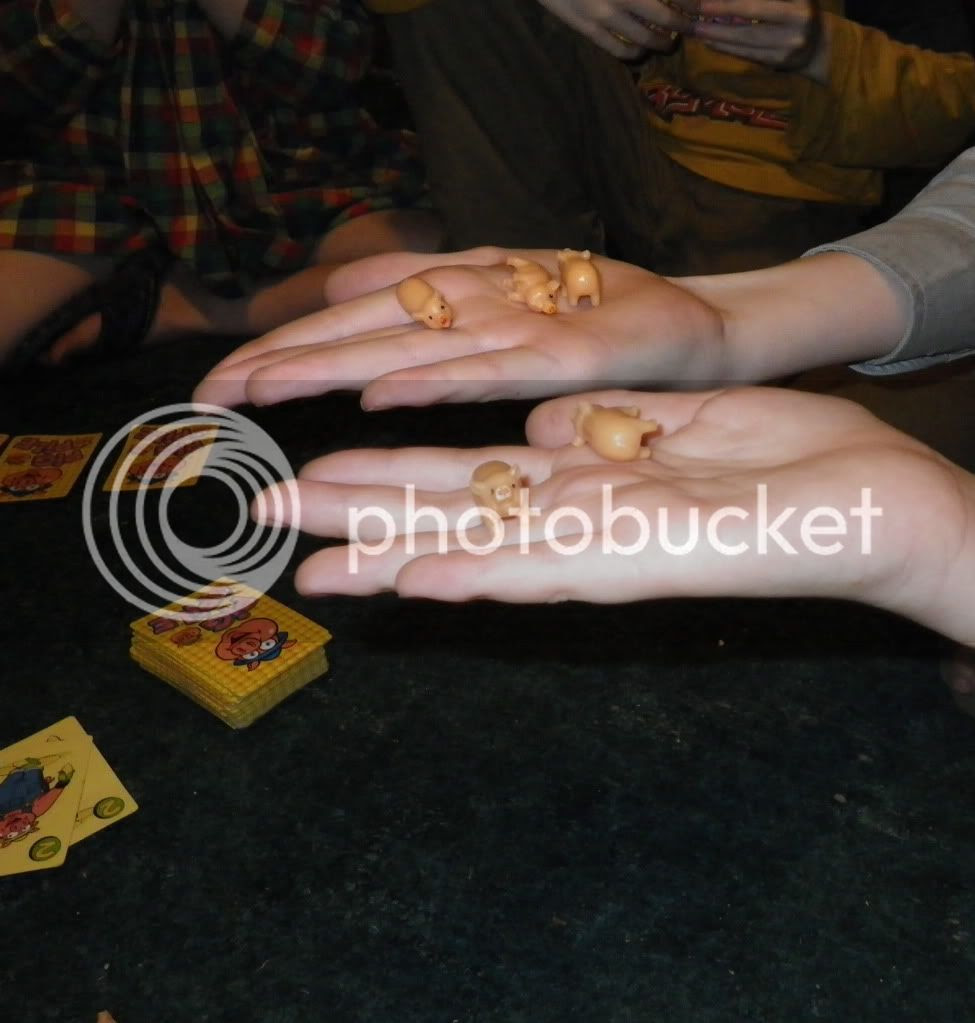 Okay, so the basic rules of the game are to play a card to the center pile that is equal or greater to what is there already.  If three of the same value are played, that is a "hogwash" and those cards get flipped to the discard pile... and you get to start fresh.  There are special cards that make you lose a turn, or do a "ewe-turn" (play switches direction) and all that kind of thing.

First person to use all their cards gets three pigs.  Next person gets two.  Then everyone but the last person gets one pig for going out.  A new hand is dealt, and the game continues, with the number of pigs being your score.

We've played the game with a number of different players.  Our conclusions (and I'm quoting/paraphrasing my kids): 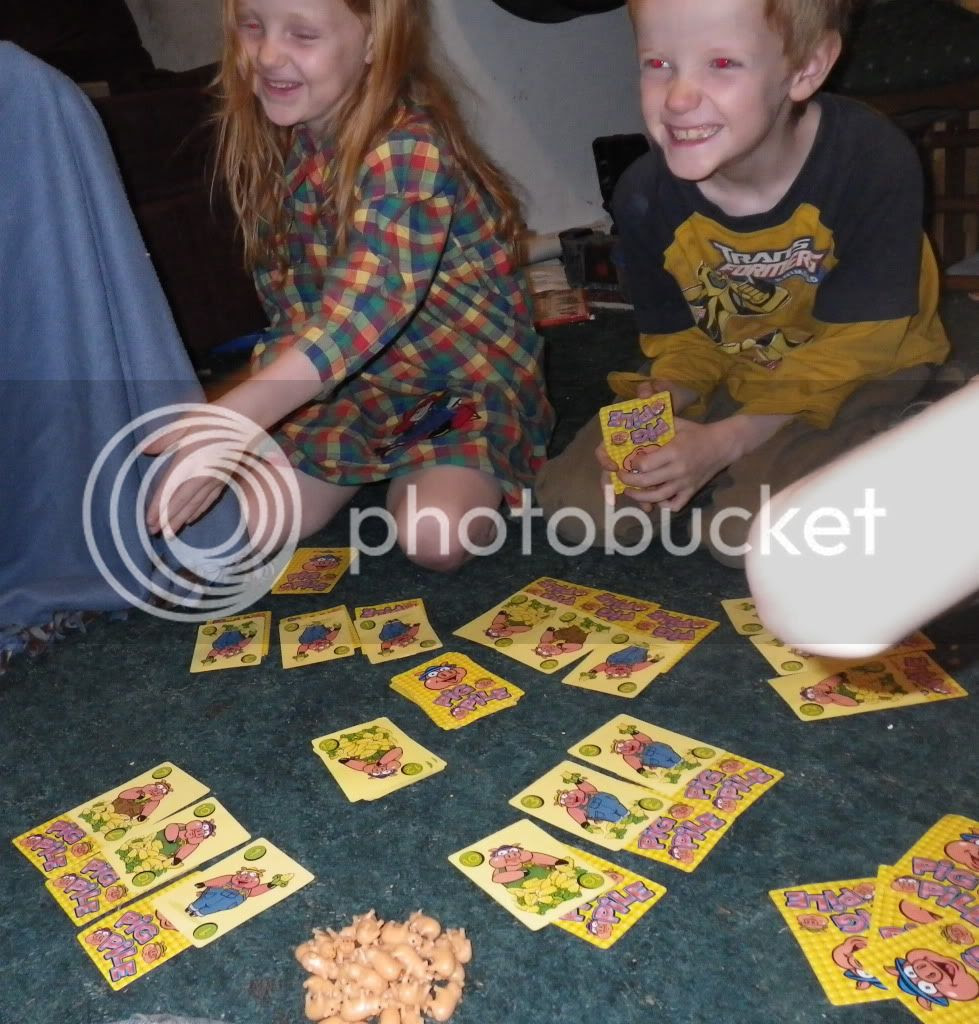 So -- our advice?  Although the game says it is for 3-6 players, it is unlikely to become a favorite if you are consistently playing with only 3-4 people.  It probably will require modification (as those pigs sit there a very long time, not being handed out).  For 5-6 people though, the game is great.


Back to who my players were:

My three oldest boys, ages 10, 12 and 14, easily grasped the rules and taught their younger siblings to play.  And their mother.

Richard, age 7, needed a little coaching in the first game, but then could easily play. 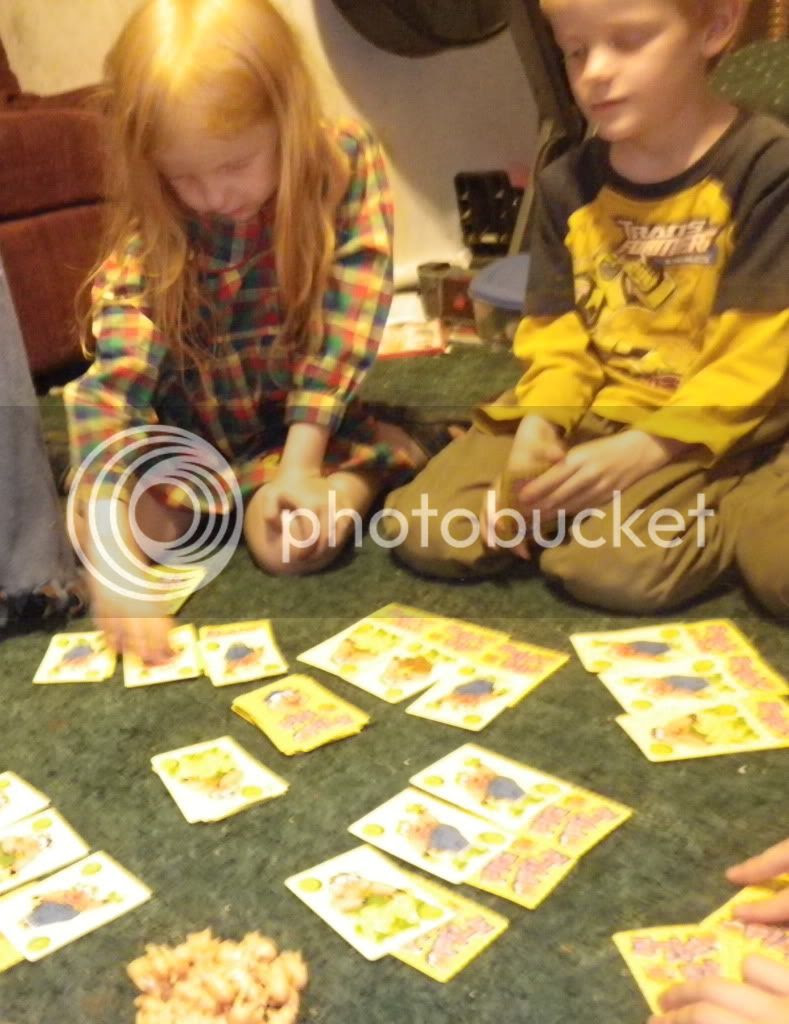 Trina, age 5, needs occasional help ("Is this a 6 or a 9?") as she plays, and after a couple dozen games, she is understanding the basic strategies.  She rarely goes out first, but she also doesn't go out last all that often.  At least not when playing with 5-6 people.  When playing with only 3 players, she loses virtually every round, doesn't get more than maybe one pig, and is frustrated.  And whiny.  It isn't pretty.  But with everyone playing, she has fun.

You can read what other TOS Crew Members have to say about Pig Pile (and about Flea Circus too) here:

Disclaimer:  As part of the TOS Homeschool Review Crew, I did receive this game in exchange for my review of the product.  All opinions are my own, and receiving complimentary products does not factor in to my opinions.  For more about my take on reviews, visit my blog post here.

Thank you for such a thorough review. I always appreciate knowing whether a game is fun for a smaller group of people. Sometimes we can gather three or four people to play, but more often than not we're looking for something to play with just two.

We've been having lots of fun with Flea Circus...love those little cats and dogs! I've also been eying Masters of Venice; Overthrone looks good, too!

What great smiles you captured! We will have to try it with a larger group, too.