I posted plans a week or so ago for Language Arts.  Mostly because I had to in order to wrap my brain around what in the world we're going to do, is it enough, and have we covered "everything."

Well, this post is about science.  Because science is fun, we love figuring out science, we always do more than planned, and I just needed something upbeat to write about.

So, then, here is the basic plan:

Connor - he'll be finishing up Biology through Virtual Homeschool Group, sometime in October.  He'll be starting Chemistry through them when they start up the school year (late August?  early September?  I'm not sure).  I'm quite sure he won't have a problem keeping up with both for those few weeks.  He's also doing some things to supplement his studies, and pursuing various rabbit trails.

William - he'll be taking General Science through Virtual Homeschool Group.  We have the mp3 of the text, so he'll be able to listen along.  I refuse to hold him back in science because of his reading.  I'll be scribing lab reports too. 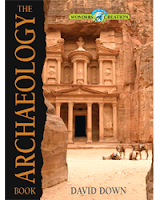 Thomas - we're still toying with a couple of options here, including the idea of finding things to do that relate to what William is studying in General Science.  I think, though, that he & I are going to work through one of the Apologia Zoology books.  And we're continuing to work through this Archaeology book.

Richard & Katrina - I think it is a little light, but they'll be working through The World God Made according to the schedule in Little Hearts for His Glory.  They'll get plenty of other science, so I'm not going to worry about it.
Posted by Debra at 7/16/2010 06:26:00 PM

We love science too and it's killing my DD that we're having a history semester now and a science semester in January. LOL. She's doing plenty on her own now for science though. Come January we'll be picking one of the Apologia Elementary books to work through. We have all of them, and I'm voting for the new Anatomy and Physiology. Maybe we'll do one book for winter and switch to a zoology or botany come spring? Who knows?

Tristan -- I'd LOVE to do the new Anatomy one, especially as so much of General Science is on the same topic. Maybe I can purchase that for January. Hmmm. Now ya got me thinkin' along those lines!

looks like a great plan, Debra. I can't get my oldest to use VHSG, as he insists that he can do it on his own. He's probably right, but we'll see after Chemistry this year. I'm doing Anatomy with the 6th, 5th, 3rd and 1st graders.

Lauren -- I don't think I could get Connor to do science without VHSG anymore. He loves being able to chat with the other students. And the extras that he gets to go and do, well, he loves it.

I think that at least for the time he is doing both Biology and Chemistry, at least, he won't be doing any extra science... As soon as biology ends, though, I know he'll be back to adding on more.

Now you've got me thinking I need to break down my planning by subject. Eldest son is STILL working through General Science. I bought Hands of a Child's Human Body project pack for the other boys to do while he was doing the second half of that text. Since we haven't gotten there yet, I guess I can say science is already somewhat planned :o) The new human body book does look interesting, though....