One of the best parts of being on the Homeschool Crew is the chance to learn a bit about companies I had never heard of.  Salem Ridge Press is an intriguing one.

Founded by a homeschool graduate, the goal of Salem Ridge Press "is to be a blessing to others by providing reading material that fits the qualifications outlined in the Bible."  Salem Ridge Press is republishing old books, but adding their own special touches.

My favorite aspect of their books are the vocabulary words included at the bottom of many of the pages.   Typically, these are defining archaic words or phrases, such as "wattled" or "trench upon."  I love that I can give my kids a really quick definition as we go, as I hate to break up the story to go look words up, and I often feel guilty that we aren't expanding our vocabularies as much as we ought to be since I don't.

We received three books in total -- two as e-books, one a physical one.  The books now in my possession include: 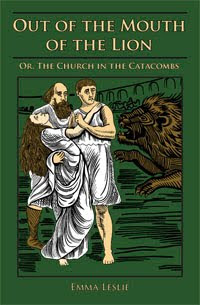 Out of the Mouth of the Lion: or The Church in the Catacombs by Emma Leslie, which takes place around 163 AD, throughout Asia Minor.  We did not read this one, but we will.  This is the one we received as a soft-cover book, which retails for $14.95.  Recommended for ages 12+, as are the two e-books I received. 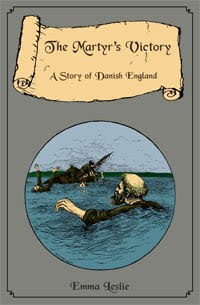 The Martyr's Victory: A Story of Danish England, also by Emma Leslie, takes place around 880 AD.  I read part of this story myself, and really did enjoy the writing style.  I was a bit taken aback, however, by a statement in the introduction where the author is basically apologizing for making a monk the hero of her story.  Looking a little closer, I see this was originally published in 1886 by the Religious Tract Society.  I didn't notice an anti-Catholic sentiment in the story itself, just in the introduction.  But the introduction was enough for me to want to read the story myself before I hand it to my kids.

I did read more about Emma Leslie, and this series.  One of the things mentioned is that the series is written from a "Reformed perspective - Throughout the series the characters learn to look to the Word of God as their only guide rather than relying on the traditions of men."  What I'm trying to figure out before I just hand the books over to my children, is whether this is truly written from a "Reformed perspective" or whether it is mostly written from an "anti-everything else (especially Roman Catholic) perspective."  From what I have read, we probably will read this aloud.

One thing I loved with this title was that in the beginning, there was a list of the primary historical characters with a brief bio for each.  There was also a timeline.  I truly appreciate having that information readily available, as my kids are forever asking who is real and who is not when we read historical fiction.  The list also makes it easy for me to assign my teen to go do a bit of research before we begin the story. 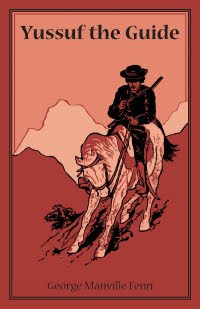 Yussuf, the Guide by George Manville Fenn.  The subtitle goes on forever:  Being the Strange Story of the Travels in Asia Minor of Burne the Lawyer, Preston the Professor, and Lawrence the Sick.  Isn't that just great?  This is the story my children picked for us to read aloud.   And we have loved it.  Ancient ruins?  That got the attention of my budding archaeologist.  An absent-minded professor?  He became a favorite character from the instant he was mentioned.  Robbers, snakes, evil captains?  Yeah, that kept the attention of my boys. We thoroughly enjoyed this book, or at least my 9, 11 and 13 year olds did.  The 6 and 4 year olds wandered away or said it was "boring."


I am very impressed with the work that Salem Ridge Press is doing.  We love reading in this house, particularly historical fiction.  So a company that is making some of the older titles available is pretty exciting.  I love the idea of having books that are not going to include gratuitous romance, you know, just so I don't have to hear one of the boys ask, "Do we have to read the kissing parts?" in his best Fred Savage voice.


You can check out what my fellow crew-mates have to say about Salem Ridge Press at:

Disclaimer:  As part of the TOS Homeschool Review Crew, I did receive one book and two e-books free from Salem Ridge Press.  The fact that I received complimentary products does not guarantee a favorable review.  It does guarantee a review. A fair review. But I am not going to praise something unless I think it deserves the praise.  If I don't like it, you'll hear that.  And hopefully with enough detail as to why so you can decide for yourself if what I hate about it makes it perfect for your family.  For more about my take on reviews, visit my blog post here.
Posted by Debra at 9/22/2010 07:07:00 AM

Old books, without the brittle pages! I will be looking into this company more. My youngest asks that same question as we read "is that real?"

I forgot to mention the wonderful vocabulary words at the bottom of each page. So glad you put that in your review! Great job, Debra.