One of the first books I read, years go, that got me started in questioning whether a theistic evolution worldview made sense to me had something to do with ancient man, and some of the "how did they do it?" questions that inevitably come up when you start digging too far.

I'll confess that up to that time, the story of the Tower of Babel was pretty much just that:  a story.  I  didn't necessarily think it was untrue, precisely. But I think I believed it in the same way I believe a child who has spent a week digging in the backward who then tells me that he is halfway to China now.  The child believes he has dug a significant distance.  Those ancient people likewise felt they had built a tower high enough to reach heaven.

Learning more about ancient man's accomplishments made me start questioning my assumptions about stories like that of Babel.  And I have loved anything I can get my hands on that helps me to make sense of these accounts. 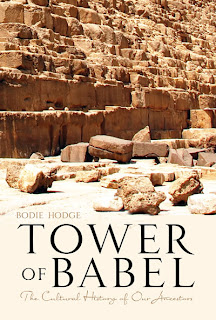 So I was thrilled, to put it mildly, to have the chance to read and review Bodie Hodge's new book, Tower of Babel: The Cultural History of Our Ancestors.  I started reading it on my Kindle immediately, and within two chapters, I knew I had to make this a family read-aloud.  So I started over.

The vast majority of the chapters are pretty short and sweet.  The first dozen (plus) cover a whole lot of ground, but they do it in a few short pages and in the clear, direct style I've come to expect from Hodge.

Before I go on, here is what Master Books, a division of New Leaf Publishing Group, has to say:


The Tower of Babel: The Cultural History of Our Ancestors reveals our shared ancestry as never before! Many are familiar with the Biblical account of Babel, but after the dispersal, there was a void beyond Biblical history until empires like Rome and Greece arose. Now, discover the truth of these people groups and their civilizations that spread across the earth and trace their roots back to Babel as well as to the sons and grandsons of Noah.

Many of today’s scholars write off what occurred at the Tower of Babel as mythology and deny that it was a historical event. Beginning with the Biblical accounts, author Bodie Hodge researched ancient texts, critical clues, and rare historic records to help solve the mystery of what became of the failed builders of Babel. For the purpose of defending the Bible, Hodge presents these and other vital historical facts surrounding this much-debated event. Teens and older can use this layman’s reference for Biblical classes, ancient history, apologetics training, and to realize their own cultural connection to the Bible.

My big boys beg me to read "one more chapter" and I've overheard them discussing some of the details we've been reading about.

I've continued to read ahead, and I highly suspect that once we reach Chapter 17: Where Did All the People Go Initially, they are going to be satisfied with a single chapter.  That chapter is 80 pages long.  Eighty very interesting pages, but still -- that is nearly one-third of the book.  None of the other chapters come close to that length!

This is a great book and I most certainly recommend it.


Disclaimer:   I received this books for free from New Leaf Publishing Group as part of the Master Books Apologetics Review Team program.  No other compensation was received.  The fact that I received complimentary products does not guarantee a favorable review.
Posted by Debra at 4/17/2013 09:00:00 PM