On Monday, we had a big scouting night.  The Cubs were having a Christmas party, but Thomas was the only one who was able to attend that, as the Boy Scouts were having the Court of Honor that was cancelled last week.

Since I was the only one there (Dale couldn't get off a second week in a row, and my parents had left), the pictures are not that great.  I had to be up front when the boys were awarded with their ranks, so we didn't get pictures of that at all.  I'll post pictures of both of them when I get the new badges sewn on though.

Anyway, up first was William, along with three other boys, receiving their Scout rank.  That's the first rank that the kids can earn.

They worked through the ranks, with a couple of kids earning Tenderfoot and Second Class.  Then it was Connor's turn.  Four boys, including Brian (who joined Webelos back when Connor did) all received their Star rank.  Star requires a fair amount of work, including at least six merit badges -- and four of those have to be Eagle-required ones.

A couple of the boys made Life too, which was presented next (including the tall one standing next to William below).

Then they called up about half the troop to receive merit badges.  There were a LOT of merit badges presented on Monday.  Including a few to our household. 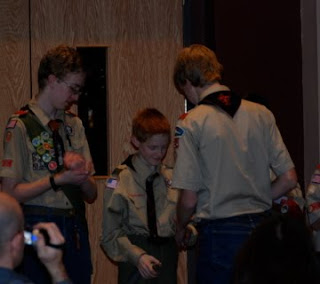 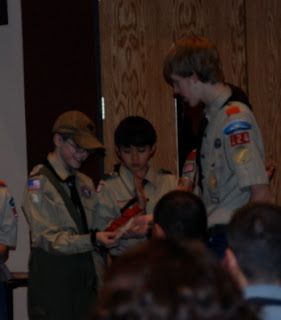 And here is Connor receiving Camping and Fingerprinting.

What a great night!  Maybe next Saturday I can post pictures of all three of my scouts in their updated uniforms.

That is so great! I wished my guys were still doing it--I miss it. Congrats to the new badge owners