I just created my own reading challenge for my kids.  Figured I had to share...

It's the Chick-fil-A Calendar Reading Challenge.  I have no idea how to do Mr. Linky or anything like that, but if anyone decides to join me, maybe I'll have to figure it out. 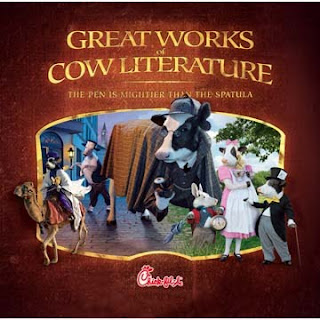 Anyway, Chick-Fil-A puts out a calendar each year that is just plain fun.  And it has great coupons on it as well.  This year, the calendar is called "Great Works of Cow Literature: The Pen is Mightier than the Spatula" and I decided that we are going to read along.

So, January is about The Three Brisketeers (who have the mantra, "One for all, and all for chicken!" and this is what prompted this decision of mine.  My kids have seen the Disney version of The Three Musketeers, but neither they, nor I, have actually read the Dumas book.  So, off to Librivox I go (it's here)... and we will be listening to it. 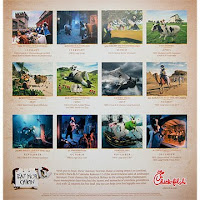 I will probably vary what we do with these.  In fact, with the heavy reading schedule we have this month, I was seriously contemplating a Children's Illustrated Classics version.  On the other hand, we do have about 16 hours in a car scheduled... so I am planning for audio.

The plan, though, is that in addition to the traditional reading of the new calendar page and examining the picture for funny details, we will also be re-reading the calendar after we read the literature for the month.  And since each calendar page includes a bio of the author (Alfalfa Dumas, in the case of Brisketeers), that will force me to go find a short bio of the real author too.  I know the library has an awesome online resource for doing that.

Care to join us?  We can't be the only homeschoolers out there with a Chick-fil-A calendar on the wall!

This sounds like fun and such a great idea. Were those calendars free at Chick-fil-a? I saw them there, but didn't get one.

Heidi -- my kids think it is great :) The calendars cost $6, but each month has coupons for free stuff. If you go to Chick-fil-A at least a couple times a year (and remember to bring the coupons), you have paid for them. January is a free bowl of soup, about half the coupons are for free drinks, but there's free chicken strips, free sandwiches, free fruit cups...

We always get these. Plus they are just so funny. And I love a restaurant that closes on Sundays.

What a fun idea, Debra!

We love Chick Fil A, too, but I've never remembered to buy a calendar. I need to make a point of buying this one.

I don't have the calendar either, but what a fun idea! Thanks for the Librivox link, that is new to me and looks like something we may use a lot.

This is a great idea, Debra! I need to see whether our local Chick-fil-a still has calendars available. I had no idea this year's calendar was a classic literature theme. Too cute! Have you seen how many are free audios on Librivox yet?

Michelle -- you know, I had started to look for Librivox recordings... I'll go ahead and link what I find. :)

Tracy -- hope you find one! The calendars are just great. :)

Jennifer -- oh, I adore Librivox. We use so much stuff from there. I hope you enjoy it too!!

I so miss chick-fil-a. Our closest one is about 3 hours from us. We've had the calendars when we lived on the East Coast. They're so much fun, and the coupons were great. **grin**

We are going to see if we can get a calendar from our local Chic-fil-a too. This just looks like so much fun! My kids all love to read, but I always try to take advantage of anything that will encourage them to read more or to read something they might not normally have wanted to read. Thanks so much for your post! :)