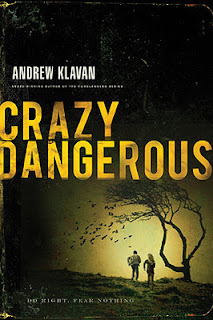 When I was presented with the opportunity to review Crazy Dangerous by Andrew Klavan, I called my nearly 15 year old to the computer to have him read this book description:

Sam Hopkins is a good kid who has fallen in with a bad crowd. Hanging around with car thieves and thugs, Sam knows it's only a matter of time before he makes one bad decision too many and gets into real trouble.

But one day, Sam sees them harassing an eccentric schoolmate of his named Jennifer. When Sam finds the courage to face the bullies down, he loses a bad set of friends and acquires a very strange new one.

Because Jennifer is not just eccentric. To Sam, she seems downright crazy. She has terrifying hallucinations involving demons and the devil and death. And here's the really crazy part: Sam is beginning to suspect that these visions may actually be prophecies--prophecies of something terrible that's going to happen very soon. Unless he can stop it.

With no one to believe him, with no one to help him, Sam is now all alone in a race against time. Finding the truth before disaster strikes is going to be both crazy and very, very dangerous.

I asked Connor if he wanted to review it, and his response was, "Yes.  Definitely."

I ended up giving it to him on his birthday.  Two days later, he had finished it.  "You have to read this, Mom!"

Connor's take:  I would definitely recommend this book to other teens.  Mr. Klavan really drew me in, and kept me guessing.  I love when I read a mystery and am actually surprised by the ending.  One great thing about the writing was that it was written in retrospect... Sam was telling the story as though he was telling you about it after it had happened.  The great part was that it kept that "looking back" feel throughout.  Some other books I've read seem to jump back and forth from past to present tense.

This is a great book.

My take:  I read this a couple weeks later.  I was immediately struck by Klavan's ability to sound like a teen boy in telling this story.  It really sounded like a teen boy narrating (well, part of it is told from Jennifer's point of view, but the majority is from Sam).

For me, the ending wasn't quite as surprising, but mostly that was because of some things Connor had said about the book.

While this is Young Adult fiction, it drew me in as well.  I definitely enjoyed this book.


Celebrate with Andrew Klavan by entering his Crazy Dangerous giveaway and connecting with him during the Author Chat Party on 5/29!

One fortunate winner will receive:
Enter today by clicking one of the icons below. But hurry, the giveaway ends at noon on May 28th. Winner will be announced at the "Crazy Dangerous" Author Chat Facebook Party on 5/29. Andrew will be hosting an Author Chat, testing your survival trivia skills, giving away books and gift certificates to iTunes and Amazon.com! Don't miss a second of the "danger"!

Grab your copy of Crazy Dangerous and connect with Andrew on the evening of 5/29/12 for an author chat and lots of giveaways.

Don't miss a moment of the fun. RSVP
today and tell your friends via FACEBOOK or TWITTER and increase your chances of winning. Hope to see
you on the 24th!

I have this book waiting for me to review. It sounds really good!