Book Review: In Every Heartbeat 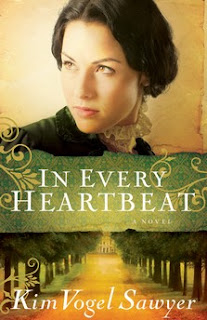 I've read a fair amount of Christian historical romances lately.  The latest is In Every Heartbeat by Kim Vogel Sawyer.

Set in the time right before the US got involved in World War I, this is the story of three childhood friends as they enter college and plan their futures.  The three grew up together in an orphanage, and all three have different hurts in their past that they will need to confront.

It took me a long time to get into this book.  Maybe I'm too old for this one.  Libby -- the female of the trio -- mostly annoyed me.  Somewhere around the halfway mark, she started to irk me less.

Pete was the first character who I actually cared about.  Pete dreams of becoming a minister, but he is hanging onto a lot of anger and resentment towards his birth family.

Bennett is the third member of the trio.  Always willing to get into a fight, always looking for excitement, always looking to find a place where he will belong.  Not that I ever got to a point where I really cared about him.


One aspect of this book that I did really like is that the characters all definitely had flaws and imperfections, and not everything worked out perfectly.  And as far as the Christian in Christian historical romance, that was far more believable than some books I have read.  One character was a committed Christian and he has a turning point where he becomes even moreso.  One character has a reasonable believable moment of 'finding God' and is a very different person as a result.  And one character doesn't quite get there, but there is still the hope that maybe...

A puzzling aspect was that Pete has an assignment to find a wrong and try to right it (rough paraphrase), and the wrong he chooses is romantic fiction.  While I totally agree with most of what Pete says about the genre, I can't help but wonder what Pete would say about this book.  It seems that there is a lot in this story that is there simply to arouse, and this book certainly gives an inaccurate view of male/female relationships as well.  Okay, so the arousal part is confined to racing pulses, sneaked kisses, hands brushing against each other.  But still.

Overall, I'm not exactly sure what my opinion is.  The book is well-written, the time period seems well-researched, and there were some minor characters who really spoke to me.  My favorite are Mr. and Mrs. Branson, who don't appear until near the end.  They were real.  Mr. Branson says something that really made me stop and ponder:


"All that time we spent fussin' about how nobody ever raised a hand to help them kids... an' we realized we'd done nothin' more 'n fuss.  We could've helped, too."

How many times have I done 'nothin' more 'n fuss"?  Hmmmm.

Disclosure:  Bethany House provided me with a complimentary copy of this book for review purposes.  No other compensation was received, and all opinions are my own.
Posted by Debra at 10/16/2010 08:01:00 AM