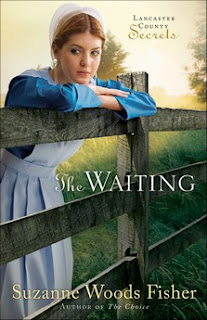 , book two in The Lancaster Secrets Collection. In The Waiting

Jorie King has been waiting for Benjamin Zook to return home to Lancaster County so they can marry.  When news arrives that Ben has been killed, Jorie finds comfort in the friendship of his brother Caleb.  That friendship ripens into love and it seems that they are meant to be together.  But when the unexpected happens, their worlds are turned upside down once more.  Will Jorie trust God to lead her into the arms of a new man?


A must read! Visit the blog tour and find out what the reviewers are saying! Learn more about Suzanne and her books at www.suzannewoodsfisher.com!

is the next stand alone story in The Lancaster Secrets Collection and follows in the footsteps of the best-selling, The Choice

. The Waiting is in stores now and to celebrate Suzanne is hosting The Waiting KINDLE Giveaway.

Join Suzanne for the Lancaster Secrets Book Club Party on October 28th! She'll be announcing the winner of the The Waiting KINDLE Giveaway, hosting a book club discussion of The Waiting and The Choice, and giving away copies of both books and HEAPs of readerly prizes! Be sure to join us on Thursday, October 28th at 5:00 PM PST (6:00 MST, 7:00 CST & 8 EST) at Suzanne's Author Page.

My take:  I picked this book up to read a chapter or two, and I literally did not put it down until I had finished it.  I was completely drawn in to the lives of the characters and into the storyline.  The story takes place in 1965, and I'm not sure I've read much set in that time period, except some civil rights protest types of books.

This did present some of the big issues of the day, namely racism and the Vietnam War.  It also dealt with issues like parents being able to direct the education of their children.  But while those things were important, really, this was just a great story.  The characters felt like real people, the places felt real.  One of the publisher's statements that really resonates with me after reading the book is "a multifaceted story about complex people living the simple life."

I immediately put the first book in the Lancaster Secrets series on hold at my library.

Hi Debra!
Just wanted to thank you for your great review about "The Waiting!" How awesome to think you couldn't put it down...wow! Nothing warms my heart more (bookwise!). Thanks for your thumbs up! ~Suzanne Fisher