As part of the TOS Homeschool Crew, I have had plenty of opportunities to test out math programs.  Most are geared primarily to younger kids, elementary aged.  Recently though, I have been working with TenMarks, a program that is geared to the older ones as well, with levels stretching from 3rd grade through Algebra II.

I first really learned about TenMarks through a webinar they gave online in conjunction with The Old Schoolhouse.  (I highly recommend watching the webinar yourself!)  They had a promotional offer there, so I signed Connor up for Geometry.  Then I got the chance to have two of my children use the program as part of this review.  So William and Thomas were signed up for 6th and 4th grade math respectively.  I have continued to pay for Connor's subscription, so this review will include my observations for all three boys.

I'm going to cut to my bottom line first:  I am seriously considering purchasing a full-year subscription for Connor right now instead of continuing to pay month-to-month.  William and Thomas have a wonderfully generous six-month subscription, so I'm not forced to make a decision about them quite yet.  I am quite certain I will continue on for William though. 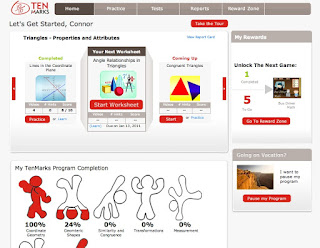 Okay, so let's back up and talk about what it is.  TenMarks is an online math subscription where the kids get the chance to watch videos and complete worksheets (see below) at their level.  There are hints available for the problems, and once you have submitted your answers, you can watch each individual problem being worked out. 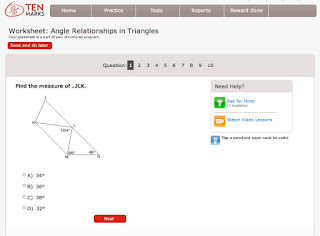 If the child does well (answers the questions without using a lot of hints) the program automatically goes on.  If the child does not do well, additional worksheets will be generated where they are not quite getting it.

Completing a certain number of worksheets unlocks some games, which my kids enjoyed, but not so much that they do the games only and not the work.  There is also the ability to set up individualized rewards.  We haven't done anything with that.

That description doesn't do it justice.

Okay, so kid by kid, here is what I like:

Connor -- He's working in geometry, which is an area of math where I struggle.  So far, I think I am able to understand the work he is doing.  But I lack confidence in geometry, so having him use TenMarks relieves me of a lot of pressure.  He watches the video, he works out the problems, and he generally does pretty well.  When he doesn't do well, it is always because he thought he could get away with skipping the video.  He's a slow learner, sometimes, but I think he has finally learned that watching the video is in his best interest.

What I love about TenMarks for him is that he is having the material presented to him in a manner that is different than what he is used to, and the questions are worded in a way that he really has to think about them.  Answers are multiple choice, so sometimes he can "cheat" on a problem and not actually have to work out the answer... but so far, that has usually been because he understands the concept well enough to grasp that there is only one reasonable answer available.  That works for me.  Quite well, actually, as that is one of the things they really push in SAT Prep courses -- learning to recognize when you actually need to do the math vs. when just applying the math concepts to the situation will make the answer obvious.


William -- he's working in the 6th grade math, and it is going very well.  I have had a couple of frustrations with the program for him though.  First is that his reading level is not at grade level, so sometimes he gets a little overwhelmed with all the words in a problem.  But since the instruction is via video, at least the teaching part he can handle on his own.  Especially with newer concepts, though, he will get brain overload going with reading the actual problems.  That means that I (or his brother) have to be available to keep him from stressing out.

The other frustration is that the program doesn't necessarily default to presenting information in a sequential order, and I have not found a way to figure out which topics build on each other.  So a couple of weeks ago, he had a worksheet that involved long division of decimals.  For a variety of reasons, he hasn't really done long division before now, so throwing decimals into that was far too many new steps at once.  Not a big deal, I knew we had avoided this.  So we spent a day or two working on long division, and THEN came back to TenMarks, where he was able to easily complete the work.

That didn't bother me at all.  But (again, going with the default order that the program set up for him) two or three worksheets later, he is being asked questions like "write a division equation for this multiplication fact:  6 x 8 = 48"

While on the one hand, it is nice to get an easy section after he struggled with parts of the last one, it also seems like it would have made sense for the section on whole numbers to appear before the section on decimals.

So I sound like I'm ragging on the program here, but I am not.  This has been fabulous for him.  The questions challenge him, but he knows there are only 10 of them, and if he does well (he always does) he'll be done.


Thomas -- he's working in the 4th grade math.  He has some of the same issues with the reading level, but not so bad.  For one thing, the math itself has tended to be a little on the easy side for him, so he is better able to handle the challenge of the reading.  I also haven't noticed the order of his material seeming weird.

I also notice for him that the multiple choice answers usually don't lend themselves to easily being able to narrow down an answer.  Probably because there isn't a whole lot of "theory" in 4th grade math, it is mostly calculation.


Overall, I am incredibly pleased with TenMarks.  There is the occasional error in the worksheet questions, but there is a tab to report a problem and they've been wonderful in responding to those.  I think the videos are quite well done, and I really appreciate the "not quite US" style that seems to require more mathematical thinking than do most American materials I've seen.

The kids are able to follow the videos quite well, and I guess the biggest thing is that they do not complain about doing math (except when a topic is totally over their head, which has only happened with the long division of decimals topic).

This is an online subscription, starting at $10/month, with discounts offered if you go for a six-month or one-year subscription.

If you are interested, one thing to check out is all the promo videos they have on their site.  Or you can check out what some of my fellow crewmates had to say at:

Disclaimer:  As part of the TOS Homeschool Review Crew, I did receive two complimentary six month subscriptions for TenMarks.  The fact that I received complimentary products does not guarantee a favorable review.  It does guarantee a review. A fair review. But I am not going to praise something unless I think it deserves the praise.  If I don't like it, you'll hear that.  And hopefully with enough detail as to why so you can decide for yourself if what I hate about it makes it perfect for your family.  For more about my take on reviews, visit my blog post here.
Posted by Debra at 1/28/2011 10:18:00 PM