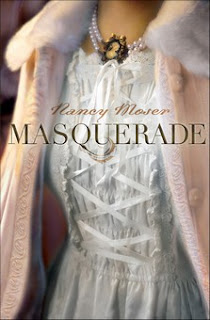 I won't call this the perfect Christian historical romance book, but Masquerade by Nancy Moser does come pretty close.

The basic plot, per the publisher:

1886. Charlotte Gleason embarks from England with conflicting emotions. She is headed for New York to marry one of America's wealthiest heirs--a man she has never even met. When her doubts gain the upper hand, she swaps identities with her maid Dora. She wants a chance at "real life," even if it means giving up financial security. For Charlotte, it's a risk she's willing to take. But what begins as the whim of a spoiled rich girl becomes a test of survival beyond her blackest nightmare.

For Dora, it's the chance of a lifetime. She is thrust into a fairy tale amid ball gowns and lavish mansions, yet is tormented by the possibility of discovery--and humiliation. And what of the man who believes she is indeed his intended? Is this what her heart truly longs for?


Okay, so that description didn't sell me on the book, but as I thought about the time period, I decided I did want to give the book a chance.  1886 would be about the time that most of my family immigrated to the United States.  Not from England, and not to New York (though some went through New York), but my ancestors were arriving here at roughly the same time portrayed in the book.

I'm glad I did.  Moser does a fantastic job of including terrific historical detail.  For instance, she used Bloomingdales catalogs from that time for the specifics in the one or two sentence descriptions of various dresses.  She names specific stores and buildings, and describes them in ways that sure sound realistic.

The Christian aspect is not overdone, which I found particularly nice.  I don't want sermons in the middle of my historical fiction, but I certainly like a good Christian message.  And it was really interesting to watch the two main characters go from being "social Christians" (attending church with parents because you are supposed to) to believing that God is real and He does care.

The only drawback was that much of the plot was predictable, with slight twists along the way.  But it was still a very fun read.

The historical notes at the end were especially fascinating.

Disclosure:  Bethany House provided me with a complimentary copy of this book for review purposes.  No other compensation was received, and all opinions are my own.
Posted by Debra at 10/07/2010 07:09:00 AM