Review: Cause and Effect 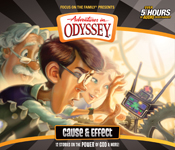 I was reminded as we listened to this just why I love Adventures in Odyssey so much:  it is something that we can ALL listen to without complaint.  I enjoy it.  My 13 year old loves analyzing each and every episode.  My 9 and 11 year olds both love telling me what THEY would have done.  My 4 and 6 year olds love to re-enact the stories later.  At just under a half hour per episode, they are a perfect length too.

As for this particular album, I think it was fantastic.  Most of the episodes did center around the concept of actions have consequences -- something I've been working on in my home as of late.  My favorite episodes on this album illustrate that.
This album also includes a Thanksgiving episode, a Christmas episode, and another half dozen besides.

My kids have requested that we start listening to Adventures in Odyssey again... so I think I need to look into finding some more albums for Christmas gifts.

Disclaimer:   I received this CD set for free from Tyndale House Publishers.  No other compensation was received.  The fact that I received a complimentary product does not guarantee a favorable review.