A good friend of mine, Brenda at Garden of Learning, put together a Gratitude Challenge.  The idea is to post for every day in November about something you are thankful for.  I've done a horrible job, but... Day Thirty  -- is an easy one.

Today, my wonderful son William turns twelve years old.  It doesn't seem possible that it can be a dozen years ago that he was born.

He was due at Christmas, and things were pretty wild.  Again.  I went on full bedrest right at the end of September, only I had to go in for biophysical profiles (BPP) frequently.  By mid-November, I had to be in every 48 hours.  Only they gave me a break at Thanksgiving -- so I didn't have to come back until Monday.

My parents were in town.  Dad dropped Mom off and headed back to North Dakota sometime on Sunday.  And because Mom would be there and could drive and carry Connor around, Dale scheduled an appointment to have his wisdom teeth pulled Monday morning.

Yeah, you all know where this is going, right?

We all headed to town.  Dropped Dale off for the wisdom teeth thing, Mom dropped me off at the hospital for my BPP, and headed back to pick up Dale.  I checked in, saw my baby on the ultrasound, and watched them do all the measurements.  And since I had now had SO many of these, I was doing the math.  And I knew.  William was fading.  Fluid levels were way down, he wasn't moving enough, even after they fed me juice.

The nurse wouldn't confirm anything, exactly, but she did finally tell me that she wasn't sure they'd insist on me having the baby today, but that she would be shocked if they let me leave the hospital.

About this time, Mom, Dale and Connor returned.  Dale with a mouthful of cotton.  I informed them we were having a baby.  The nurse rolled her eyes at me and said, "I didn't say that..."

Then the doctor came in and said, "You guys ready to have a baby today?"

Poor Dale, he hasn't been watching this BPP and doesn't know anything.  And, well, he can barely talk with all the stuff in his mouth.  The doctor conveys that this time, it won't be an emergency c-section, but that we do need to get this child out as he is starting to really go downhill.

It was really nice to actually be told what was going to happen before it happened.  And I was able to be awake for the delivery.  William was born that afternoon, and we was over 4.5 pounds.  They did not race him off to NICU, but he still did end up there for about a week.

His NICU stay was actually a bit harder than Connor's though.  We knew more.  We understood more.  And William fluctuated a lot.  He would be doing great, and then he'd crash.  He'd steadily improve, then he'd crash.  Oh, it was tough.  But how can it be twelve years ago?

I wish I had more photos, but I'm lousy at taking pictures, and I'm not usually the one with the camera.  But maybe I can put in a couple... 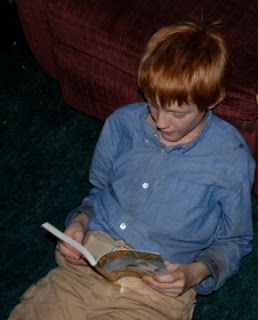 Happy Birthday to William!...and you're right, it can't already be 12 years. I frequently think of all our boys frozen in time somewhere between 1999-2002...

Happy Birthday to William. I hope he has a great day!

Happy Birthday to your son! The time does fly fast. Love the Scout uniform, we are really into scouting here (that was my thankfulness for yesterday).

Happy Birthday William. WOW....my oldest son is 31 and the other is 30 and what would it be like to have them be 12 again. So long ago, but yet was like yesterday (the 30 year old was on crutches with a broken tibula and fibula this time of year when he was 12 lol)